On November 21, CKUA celebrates 93 years of being Alberta’s voice for music, arts, and culture! Thank you for welcoming us into your lives for almost a century.

Stay tuned for special birthday shows with Keri Rak, Saturday at 8am MT on The Wake-up Shake-up, Allison Brock at 10am on Wide Cut Country, right through to the Dirty Windshields Radio Hour with Leeroy Stagger. The  celebration concludes on Mulligan Stew with the one and only Terry David Mulligan. 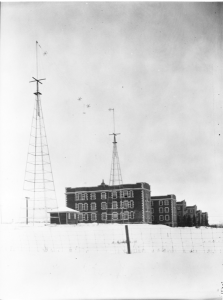 The transmitter consisted of two 80-foot-tall farm windmill towers topped by 20-foot mass. Pictured here in this photo are the antennae towers at Pembina Hall on the University of Alberta campus, taken in November, 1927.

CKUA was founded as part of the University of Alberta Department of Extension.  A.E. Ottewellwas the first Dean of the department and his mandate was reaching the rural communities. He went  through seven Ford Model Ts in his outreach to rural public. Ottewellwould pack his car with books and a movie projector and drive to small towns throughout the province. When he reached a town, he would screen informational films in town halls and gave informal lectures.

This changed when the Dept of Extension began broadcasting weekly lectures aimed at a rural audience, using free air time on CJCA in 1925. The Department of Extension purchased CJCA and changed the call signal to CKUA in 1927.  They had work to do to build a radio station though. They needed to find masts to carry the antennae, a transmitter, tubes, control board and studio equipment. The Department of Electrical Engineering helped, along with their ingenuity that included burlap sacks as soundproofing and buying items piece meal then putting them together.

Other things/people that are 93 years old this year:

We’re honoured to have played a role in our community and to have your support and friendship, in good times and bad. Here’s to 93 more years of growing together with CKUA!

“CKUA” by Karen Bishop is used with permission of the artist. Hear more about this 2020 painting or Learn how to purchase this work, and support CKUA at the same time.