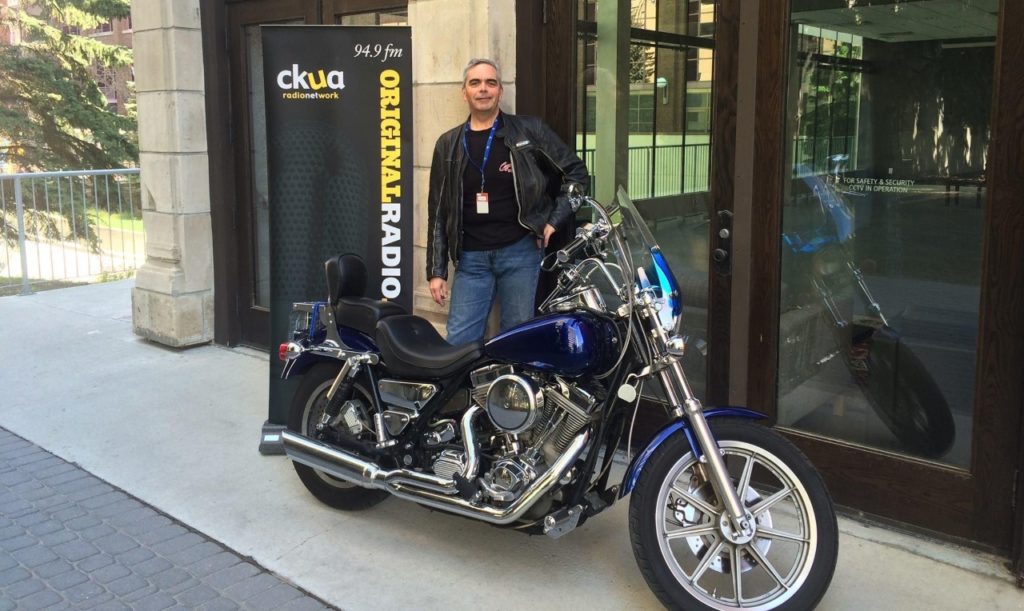 Cam Hayden has hosted a variety of musical programs since he began working at CKUA in 1978. We caught up with Cam to ask him some questions about different styles of music, the blues birthday party he’d most like to attend, and even his high school days!

Some of us learned, during the Spring 2022 fundraiser, that you got your radio start in high school radio. Can you tell us about that?

I was in grade 10 at Bishop Grandin High School in Calgary when I met another student who wanted to start a radio station to broadcast before and after classes and during lunch hour. We got permission to go ahead and even got credit as a shop course because we actually built the simple mixer and assembled the other pieces (turntables/microphones/tape recorders) from AV supplies that would be required to broadcast. I ran the station for 2 years (grades 11 and 12) and it was a blast! We were given a room to work out of, hard wired the little mixer into the school PA, and were off to the races. In a side note, a friend that took over when I left high school later became a CKUA employee as well: Dan Cherwoniak.

When did you begin working at CKUA, and what was the first program you hosted?

I started at CKUA July 26, 1978. I was hired as a full-time staff announcer and producer shortly after graduating from the Television, Stage and Radio Arts program at SAIT. I started as the “Classics at 9” and “Classics at 1” guy. Each was a 2-hour block of classical music. It was a bit of a stretch for me as a 22-year-old who had primarily been a rock and blues fan, but the other staff members were very helpful, and honestly, I was in music heaven spending my non broadcast hours just “dropping the needle” on literally thousands of recordings that I had never heard before. Having an open mind and developing an ear for music of all types were the key to open the door to an incredible journey of learning.

Your abilities as an announcer who can host any type of show, with any style of music, are legendary. Is there a program at CKUA you have not hosted, or any style of music you would not feel comfortable talking about?

It’s true that I’ve done pretty much all the shifts you can cover at CKUA, first as a full-time staff announcer from 1978 to 2001 and since then as a fill-in host on programs and of course host of The Friday Night Blues Party. That open mind and appreciation for all kinds of music coupled with the collaborative nature of the programming staff has made it a joy to learn more about music as I go. I look forward to the challenges involved with preparing and presenting programs of all kinds. I wouldn’t say I am uncomfortable talking about any style of music, but I would definitely say that some styles would require me to learn more before doing so.

Friday Night Blues Party always includes a nod to blues artists who are celebrating birthdays. If you had the chance to get an invitation to one blues great’s birthday celebration, whose party would you choose?

Unfair question! That’s kind of like asking a parent which child they love the most. What I would love to do is be able to go back in time and be a fly on the wall for any one of a number of memorable backstage conversations that must have taken place in the 1950s and 1960s when the electric blues scene was emerging and morphing in Memphis, Chicago, Detroit, London, and other places.

You’ve been the producer of the Edmonton Blues Fest for more than two decades. What can people expect at this year’s festival, and which acts are you most excited to welcome?

I’ve been told by many around the world that The Edmonton Blues Festival is one of the very few “real blues” festivals anymore, but that doesn’t mean we don’t stretch the boundaries of the blues. Zydeco is always a favourite, and CJ Chenier will certainly light it up and fill the dance floor on Saturday. Friday will feature The Legendary Downchild Blues Band, celebrating over 50 years of blues excellence, and Sue Foley working with the Texas Horns. Sue won 2 Blues Music Awards and 2 Maple Blues Awards this year and is definitely at the top of her form in a career spanning over 3 decades. I have been trying to get Ruthie Foster for 10 years and the stars finally aligned to have Ruthie as our closer on Sunday night. She is a gem. A Spiritual, talented, incredible singer and songwriter with her backing quintet that will send us all on our way out of the Amphitheatre and into the night with good vibes and a case of the “Warm Fuzzies.”