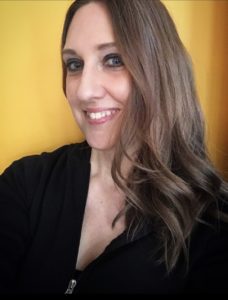 Traffic Jams host Lisa Wilton is not shy about asking the CKUA audience what’s on their minds. She’s asked for TV and movie recommendations, and she’s even invited people to share recipes. We recently asked Lisa five questions to find out more about her, and learn why she’s so successful at communicating with CKUA’s loyal listeners.

1)     How long have you been a host at CKUA, and what programs did you host before Traffic Jams started?

I was working as a freelance writer (and super part-time bartender at the wonderful Danish Canadian Club in Calgary) when a friend from my CJSW days gave my name to David Ward and Kevin Wilson, who were looking for Calgary voices to join CKUA. I sent in a demo and then was asked to fill in as host for The Takeaway on Saturday nights in April of 2016. After a few months I became the official host. In March 2019, I became the host of the 4 to 6 PM slot, and the next year we added the name Traffic Jams, as well as an extra hour.

2)     What is the theme or idea that has generated the most audience response on Traffic Jams?

I recently did a “Gen X'” theme and played several songs from the 80s and 90s. I received quite a few responses from Gen Xers excited to hear music from that era. Someone even donated because they were so excited to hear Depeche Mode! People also love songs about trains and cars. Oddly enough, though, two of the biggest responses I’ve received were from questions I asked out of the blue. One day, I ate a bad (and overpriced) egg salad sandwich, so I asked listeners if they had a favourite egg salad recipe. And wow, people are very passionate about egg salad! Another time, I was talking about a Scandinavian crime drama I’d just finished watching and asked if anyone had suggestions for other Scandinavian/British crime dramas. So many people responded that I ended up compiling a list.

3)     Can you talk a bit about how you curate each show? How many requests can you fit in, and how much is your own prepared playlist?

Like all CKUA announcers, I spend a lot of time trying to find a good mix of songs—new singles or discoveries and familiar classics in many different genres, while showcasing Albertan and Canadian musicians and making sure the vibe remains largely upbeat. I usually have the entire playlist prepared by the time I go on air, but if I get a couple of great requests that come in, I’m happy to swap songs out.

4)     Do you have a favourite theme or idea that you’ve done on Traffic Jams?

I enjoyed the Gen X show (probably because I’m a Gen Xer), but I also liked putting together the show where I played songs by artists who have had animals and plants named after them. (I didn’t know so many spiders were named after singers—take the trapdoor spider named Myrmekiaphila neilyoungi, for example.) I also did a show featuring artists who have been honoured with postage stamps in different countries. Family themes are also fun since there are so many artists who have musical parents or siblings.

5)     Many people listen while they are on their way home from work. What is the ultimate driving or road trip song?

That’s a tough one. There are so many great road trip songs! I will say, my foot tends to be a little heavier on the gas pedal when I hear “Don’t Wanna Know If You Are Lonely” by Hüsker Dü, so I have to be careful with that one. “Red Eyes” by The War On Drugs is good for highway driving. But if we’re talking classic driving songs, “Six Days On the Road” by the Flying Burrito Brothers, “Roll On Down The Highway” by BTO, and “Run Runaway” by Slade are pretty awesome.

Oskar Zybart and growing ‘In Our Neighbourhood’