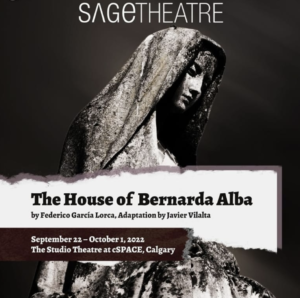 The year 1936 was a very fascinating time in Spain’s history. The ascension to power of General Francisco Franco planted the seeds of fear and paranoia in a society that was falling prey to a repressive regime. One of Spain’s most prominent playwrights, Frederico Garcia Lorca, was not immune to his surroundings, and within his brilliant body of work, The House Of Bernarda Alba is still the pinnacle.

Written in 1936, the story is a powerful metaphor for the psychologically damaging effect of repressed desires, and isolation. Following the death of their father, five daughters are trapped forcibly by their mother inside a house that gradually comes alive, unveiling hidden family secrets. Calgary’s provocative theatre company Sage Theatre is presenting The House Of Bernarda Alba September 22 through October 2 at cSPACE.

On Theatre: One Yellow Rabbit presents “She Sat Down and Wept”