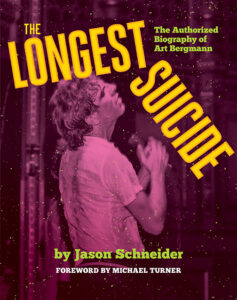 He’s been dubbed Canada’s Lou Reed, and celebrated as the nation’s premier “Punk Poet Laureate.” Canadian singer/songwriter Art Bergmann started his music career in Abbotsford, B.C. in the early 1970s. However, it wasn’t until he co-founded The K-Tels, who eventually turned into The Young Canadians, that he became a key figure in the Canadian punk music scene.

Until now, Bergmann’s story had yet to be fully told. That is, until veteran music journalist Jason Schneider approached him about making a biography on his life. Titled The Longest Suicide: The Authorized Biography of Art Bergmann, the book reveals the musician’s fascinating and incredible story. Schneider and Bergmann will take part in a Wordfest event in support of the book release, taking place in Calgary on December 6.