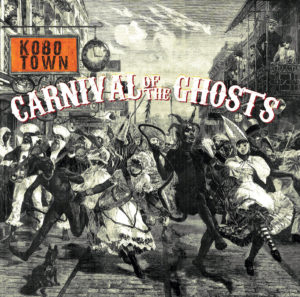 Founded and fronted by émigré Trinidadian-songwriter Drew Gonsalves, Kobo Town continues to redefine calypso music and push the boundaries of the Caribbean sound with its fourth album, Carnival of the Ghosts.

Gonsalves was riding the Paris Metro when a colourfully dressed old man stepped into the car, fiddling madly – skillfully -and step dancing all the while. No one looked up from their phones. In that moment, the thought occurred to Drew that the old man might be an apparition, the ghost of a long-gone musician shimmering in a shady dimension. But what if it were the man who was living and all these grey somnambulists riding the train were the shades of the dead? In that instant Carnival of the Ghosts was conceived.

At once brooding and joyous, intensely poetic and highly danceable, Gonsalves’ songs betray deep roots in Caribbean folk music, while the band delivers them with an indomitable energy that has earned them a considerable following far beyond the niche of world music enthusiasts and calypso fans.

Be sure to check out Kobo Town while they are on tour in the prairies!

Kobo Town’s Drew Gonsalves on the state of calypso