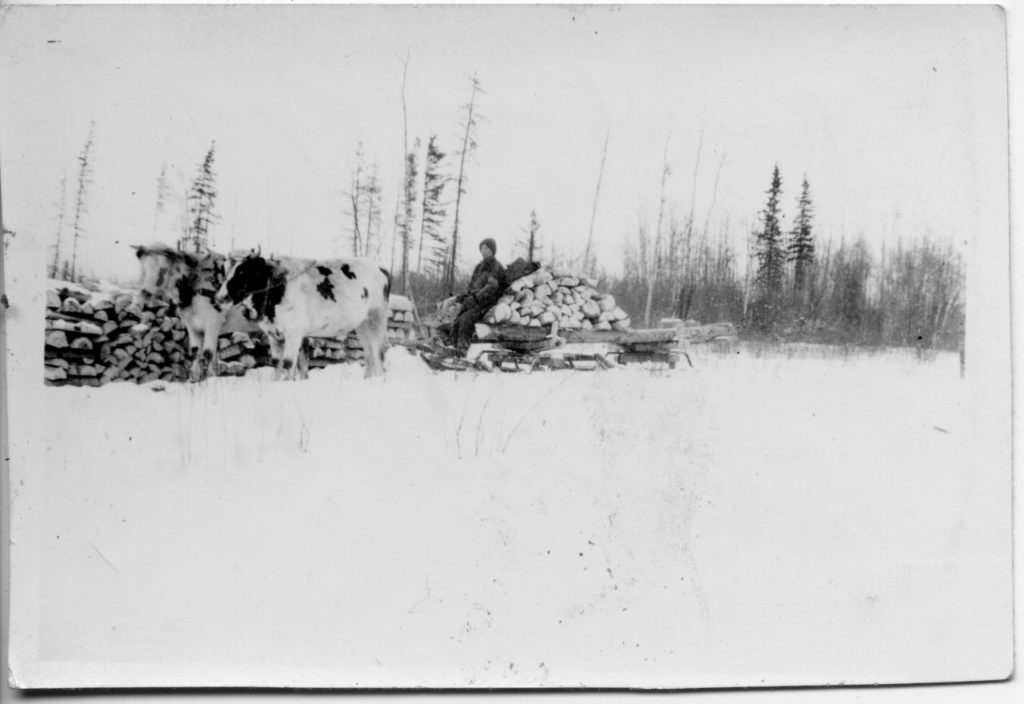 Do you have a story about you and CKUA that you’d like to share with us? Please let us know by writing us. We’d love to feature it! What do such stories look like?
Well, here’s one by listener Arnold Rumbold, whose late father, George, is pictured above, bringing a partial load of cordwood to an Alberta one-room school, likely in 1937.

CKUA became part of my radio listening experience in the spring of 1940. How it came about is the story of my father and his need for news from England.

My father, George Rumbold, was sent in 1914 from London, England to Ontario, as a farm labourer, and later took out a homestead near Peace River, AB. In September, 1939, with the clouds of war enveloping his homeland, he yearned for up-to-date news. Although there were a few radios appearing in the district, there was no money for one in our home.

In desperation, his thoughts turned to the poplar and spruce forests nearby.  Everyone in Peace River burned wood for heating, including most merchants. Dad approached the owner of the local hardware, Mr. Otis Broughton, with the suggestion of supplying eight sleigh loads of cord wood in exchange for a $40.00 Marconi radio.

The deal was quickly agreed to, and he toiled all through the winter of 1939-40 to bring in those eight loads. He had no power saw – the trees were felled and sawn into cord wood by hand, then hauled by a team of horses for the 17 miles to town – a long day’s journey for each load.

All that drudgery was forgotten when, after delivering the last load, he returned home with his new Marconi battery radio with the all important short wave bands.  Quickly setting it up, he was delighted to hear the announcer intone “This is London calling” followed by the sound of Big Ben.

However devastating, Dad had first-hand, up-to-date news during the dark days of the London blitz.  When the announcer later told of the fall of Singapore, Dad stamped his foot in disappointment and in a voice rising in rage, uncharacteristically shouted “damn” three times – a scene I have never forgotten.

My parents both appreciated classical music – the dial was often at 580 khz AM. Their loyalty to CKUA set my own interest in opera and serious music, which has now spanned 80 years.

Although I do not recall the year, I still remember the chords of the triumphant music announcing CKUA could now be heard on the 94.9 mhz FM band – the clarity was wonderful and fairly shook our living room! Dad called from his home in Ponoka and exalted, “Did you hear that bass?” It was another mutual CKUA moment never to be forgotten.

I enjoy the programming offered by Mark Antonelli and Orest Soltekevych and sponsor an hour to Orest’s programming each season. Baba Singh and Andy Donnelly are enjoyed occasionally. Often if I am driving home later in the evening I enjoy the quiet observations and playlist of Bob Chelmick in his cabin by the lake. A few of my memories.
Do keep up the good work, folks.
Arnold Rumbold

Thanks again for sharing this lovely, personal anecdote about you and CKUA Arnold!