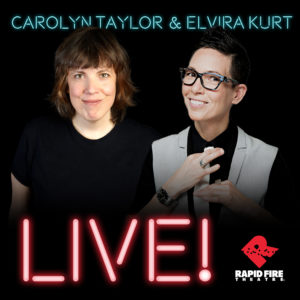 Edmonton’s Citadel Theatre is presenting two of the best in the business. Elvira Kurt has an extensive career in stand-up and has appeared in The Debaters and The Great Canadian Baking Show. Carolyn Taylor is best known as one of the creators and stars of CBC sketch comedy series The Baroness Von Sketch Show.

The two acclaimed comedians are teaming up with Rapid Fire Theatre for a show at the Citadel, April 22 and 23. Carolyn Taylor and Elvira Kurt both began their careers at Second City and are excited to revisit some of that delicious magic before live audiences.

Carolyn Taylor recently joined CKUA’s Tony King to share the thrill of being on stage again, and the joy of creating an experimental figure skating program:

On Comedy: Rapid Fire Theatre kicks off their 41st season