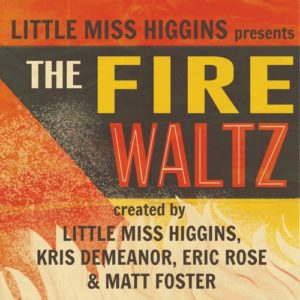 Slated for release Friday, March 18, The Fire Waltz is an album, miniseries, and a historical project by a CKUA favourite, Little Miss Higgins. It traces her great-grandmother’s journey with her two young kids across the Atlantic, and the frozen expanse of Canada, settling in Southern Alberta in the winter of 1918. And The Fire Waltz is also a multi-part podcast, crafted in the manner of old radio dramas!

Originally created as a theatre piece in collaboration with former Calgary poet laureate Kris Demeanor, the pandemic era saw the show transform instead into a dramatic podcast. In addition to taking the lead role, Little Miss Higgins presents the 20 songs from the album as signposts along the journey, and she even provides the exquisite sound design that takes you right inside this century-old Alberta story.

Have a listen to the first single, “Three Days On A Page,” and the two-part conversation between Grant Stovel and Jolene Higgins about bringing this project to life.