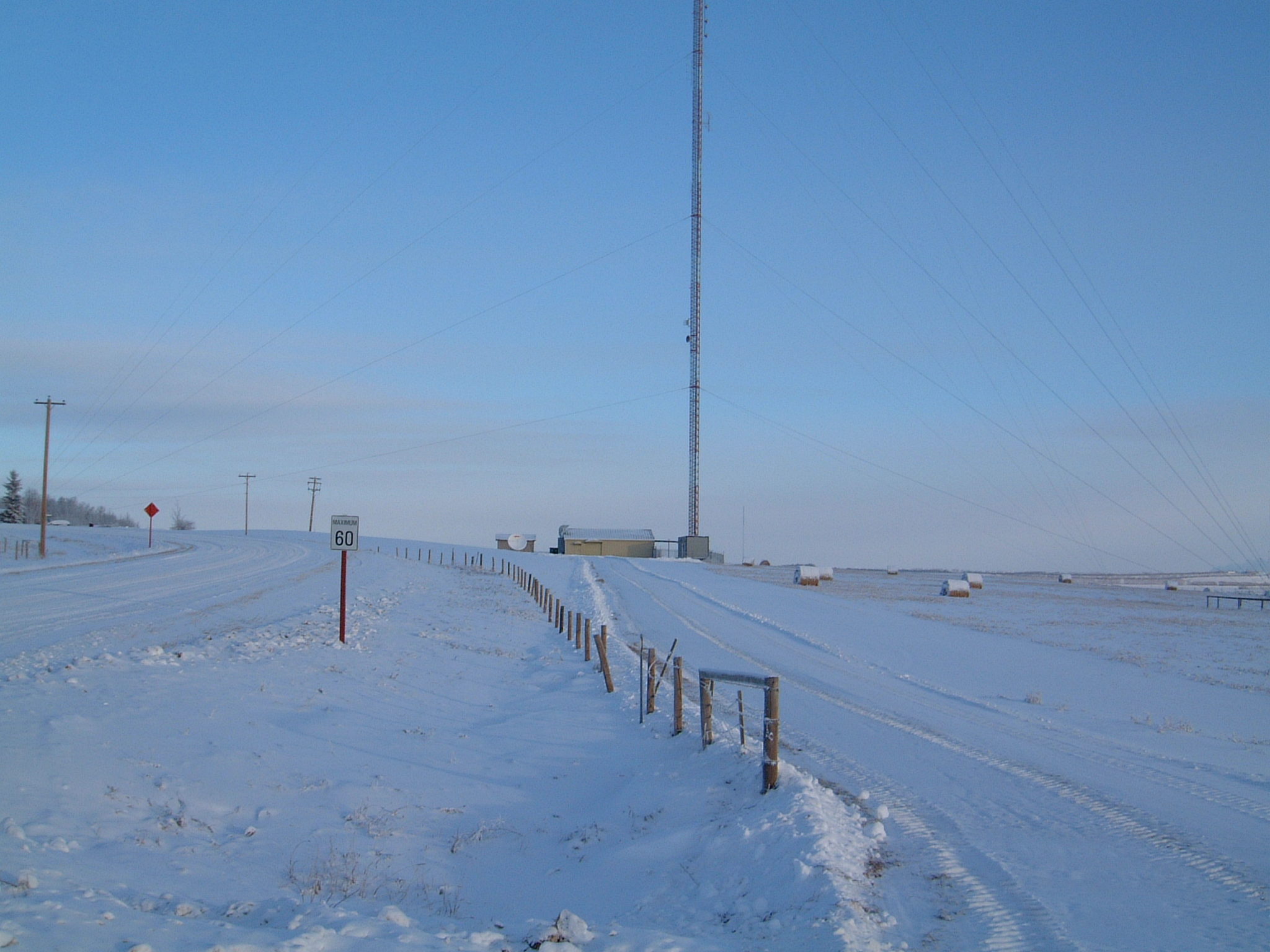 At CKUA, it takes a whole team of music-loving humans to make the magic happen. Beyond the people, it also takes a whole whack of technology and infrastructure. Today we gather to sing the praises of (drumroll, please,) a critical part of said whack: our transmitter sites!

Without our 16 sites, you would tune your radio to CKUA and … silence. Yet these technical workhorses get little recognition, little applause. And beyond those blessed with an understanding of broadcast engineering, how many of us even know what’s involved at one?

Fear not, however, we are here to fill you in on the marvel that is a CKUA transmitter site. Let’s break it down to five parts.

BUILDING: CKUA’s transmitter buildings hold all the technology and equipment that needs to stay safe, dry and cool. This includes all sorts of fascinating bits and pieces, from audio amplifiers to exciters. It’s also the home of the ever-important transmitter itself.

Our buildings vary greatly, depending on their age and location. Our building in Edson, for example, is not exactly imposing. At four feet by four feet, one might say it’s rather puny! However, that’s enough space for all that’s needed. It lives, rather charmingly, in a farmer’s field with horses and a donkey to keep guard. Our largest site in Edmonton has a building closer to 20 feet by 30 feet.

Though the style of our transmitter buildings might be summed up as ‘practical, basic and, well, boring,’ our Banff site wins the prize for prettiest location. It overlooks the valley leading into the townsite, surrounded by the ever-stunning Rocky Mountains.

TRANSMITTER: The transmitter takes the signal from the satellite dish and sends it to the antenna on top of the tower. The antenna then multiplies the transmitter’s power to shoot the signal out across the countryside.

Our transmitters use both the older tube technology as well as solid state components, though over 90% of our transmitters are solid state. One downside of the tube transmitters is that they produce a lot of heat. If the fans or air conditioning go down, it can rapidly hit 50C on a summer day. As you might imagine, this displeases the equipment, which will protest by shutting itself down. This means CKUA goes off the air, precipitating a scramble by our engineers and monitors to get things fixed.

ANTENNA: The antenna sits on top of the tower and multiplies the power of the transmitter, up to six times. This is how the radio signal reaches you, even when you’re driving along dozens of kilometres from the transmitter site.

Of everything involved at a transmitter site, labour to install an antenna is one of the most expensive parts. The price tag could easily be $35,000 for a four-person crew for four to five days. That includes trucks, equipment, a winch and interestingly, a piece of rope that is at least 1,500 ft long. Luckily, with many of CKUA’s transmitters having worked well for 35+ years, it’s not often we have to install new antennae.

TOWER: The tower is the steel structure that the antenna is mounted on (think very humble Eiffel Tower.) It is located close to the building and held up with steel guy lines anchored to blocks of concrete.

Our Whitecourt site boasts our smallest tower, at about 30 feet tall. It’s located on top of the local forestry tower, however, so it gets a boost! Our tallest towers are in Edmonton and Calgary, both around a whopping 650 feet.

SATELLITE DISH: CKUA sends its programs to each site via satellite. The dish is located beside the building and is pointed at Anik-F2, the geostationary satellite we use. Each dish can be as large as 12 feet across.

Albertan winters can be a menace to satellite dishes. If snow builds up, the dastardly white substance can prevent the satellite signal from being received. This means one of our satellite monitors or engineers must hasten to the site with a broom.

Radio wave transmission technology made it possible for the very first radio program to be broadcast in 1904. CKUA hit the airwaves in 1927. Our transmitters have been diligently performing their duty ever since, bless their cold metal hearts.