Do you have a story about you and CKUA that you’d like to share with us? Please let us know by sending us an email! We’d love to feature it! What do such stories look like? Well, here’s one by listener Andrew Hall! 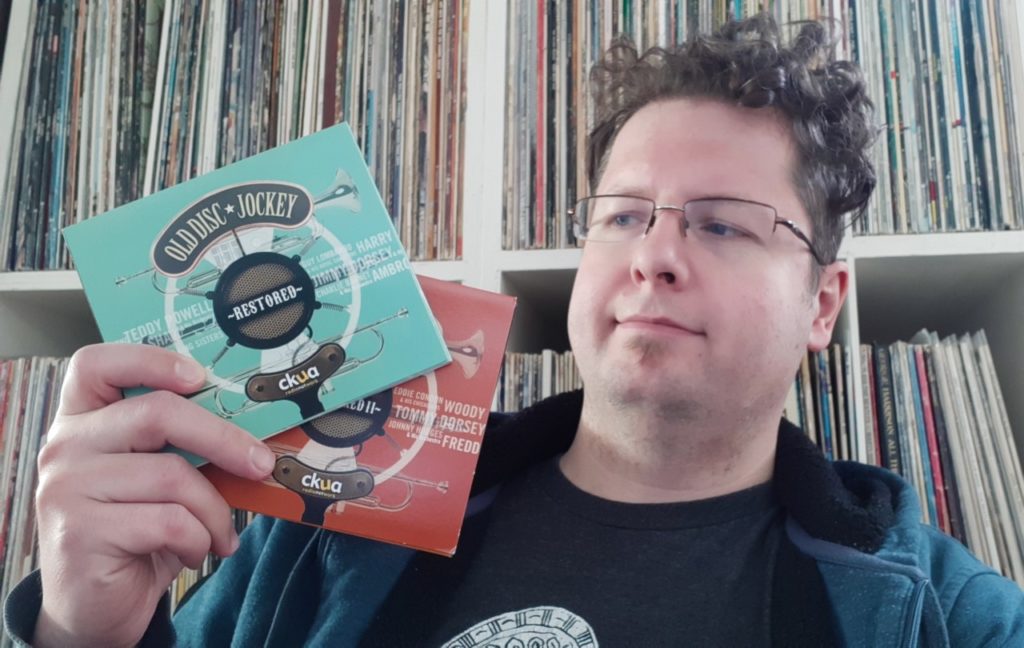 March 20, 1997 was for many Albertans, however so briefly, the day the music died.

CKUA radio was suddenly taken off the AM and FM air, leaving a void across the western province’s 660,000 square kilometres—a void both literal on the radio dial and emotional in the hearts of several generations of music lovers.

At age 15 I had barely discovered CKUA. A year or so prior to the mysterious ’97 shutdown I’d been hearing anything but Top 40 content on the station’s Sunday afternoons. It was a bizarre and curious thrill to hear things like “The Imperial March” from The Empire Strikes Back soundtrack instead of endless loops of Garth Brooks, Jann Arden, and Bryan Adams singles.

One such voice that emanated strongly was that of John Worthington (Jack Hagerman), more prestigiously known as CKUA’s Old-Disc Jockey. Having been involved with the station in several capacities for several decades, Worthington began hosting his own titular program lovingly dedicated to the restoration and historical contextualization of big band and swing jazz music of the early 20th century.

Worthington’s playlists helped to turn myself and others on to the sweet, lively, and quite often fun sounds of early jazz. The big (and small) bands of Duke Ellington, Count Basie, Benny Goodman and others throbbed and jumped and jived out of the radio with a to-this-very-day timeless energy.

The Old-Disc Jockey blended poignancy with humour, often slipping in bits of wryness instead of just talking up every single song as if it were more than it was. With the exception of the “mandatory, obligatory” Duke Ellington selection at the halfway point of each hour-long episode Worthington would play classics and rarities, deep cuts and mainstays and everything in between, displaying a full variety of all things “swing.”

Whenever possible, Worthington would include recording and release dates, label information and, perhaps most fascinatingly, as complete a list of performers as was historically available. These weren’t just nice songs to him—the Who, What, Where and How mattered just as much as the swing factor.

All of this made the music feel yet relevant, even 50+ years removed. The Old-Disc Jockey made you feel that big band / swing era music wasn’t just nostalgic detritus reserved for libraries and sentimental grandparents. Anyone could access, discover and fall in love with it, including a teenager in a North Albertan farming community.

Now some 20 years later the music yet again died, however so briefly, with the passing of John Worthington. He’s not completely gone, obviously—CKUA still rebroadcasts episodes of the Old-Disc Jockey, allowing listeners and fans both old and new to come “back here, next Sunday, same place,” to hear a wise and passionate voice wax more than nostalgic on a particular—and particularly fun—sound of yesteryear.

Thank you for your voice, Mr. Worthington. In the spirit of your timeless program sign-off, we your devotees shall forever dance, “onward… to yesterday!”

Thanks again for telling us this detailed, historical story Andrew!