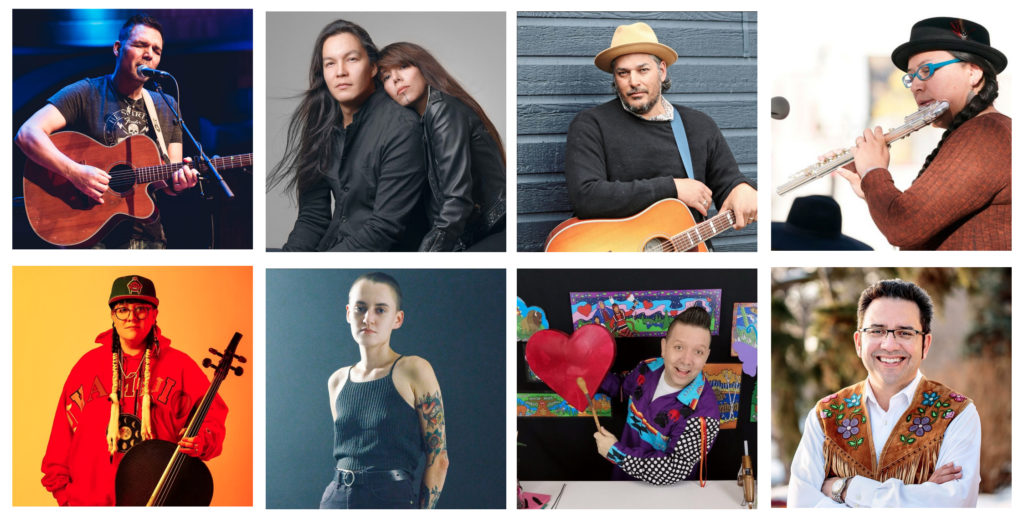 Tuesday, June 21 is National Indigenous Peoples Day, a day to recognize and celebrate the strong heritage, diverse cultures, and many contributions of First Nations, Inuit, and Métis peoples. CKUA presented special programming throughout the day. Hosts welcomed guests to spin tunes and talk about their work, and the entire day’s programming included the music of Indigenous artists, both emerging and familiar.

Lance Cardinal is a visual designer whose work has been seen in such high-profile settings as Ikea and the National Hockey League. His new project is a mural to welcome people to the Telus World of Science in Edmonton. Don’t miss Grant Stovel‘s conversation with this talented artist:

Mid Morning, hosted by Amy van Keeken, featured an all-Indigenous playlist including artists from all over the world, spanning many genres, decades and styles. If you tuned in, you heard artists from around the globe, including Alice Skye, Baker Boy, Lloyd Cheechoo, Terry Uyarak, Lido Pimienta, Mildred Bailey, Cris Derksen and more.

On Traffic Jams, Lisa Wilton was joined by JUNO-nominated singer and songwriter Adrian Sutherland. Adrian hails from the Attawapiskat First Nation in Ontario and was a member of the Indigenous rock band Midnight Shine. In 2021, he released his debut solo album, When the Magic Hits, and earlier this year he was nominated for the JUNO for Indigenous Artist or Group of the Year. Adrian joined Lisa to talk about his career and share a few of his favourite songs.

Plus! Born and raised on the West Coast, Cree and Métis artist Michelle Sound is a member of Northern Alberta’s Wapsewsipi/Swan River First Nation. She has created a new exhibition that features two distinct works and utilizes several different forms and media. kanawêyimêw (She takes care of them) is described as the artist’s “homage to the strength, labour and sacrifice of her forebears and a tender tribute to maternal love.”
Learn more.

The Departure Lounge, with Erin Ross

Troy Kokol who is a local to Calgary, and Alberta-raised Métis singer and songwriter, joined Erin Ross in the booth to curate some selections for Departure Lounge listeners. They had a chance to talk about his work and his story as a Métis artist living and working in the musical ecosystem of Alberta.

Far Out, with Amy van Keeken

This week on Far Out, Amy van Keeken shares a radio version of CKUA’s Hidden Track podcast, featuring the life and work of musician, activist, and innovator Buffy Sainte-Marie. You can hear excerpts from the podcast as well as music from Buffy’s peers, those who have been inspired by her, and of course, songs from her own vast and varied catalogue. Amy is a huge fan of Buffy’s work. She’s grateful to Buffy for sharing her light with us, and so excited to be showcasing this stunning podcast put together by some talented folks at CKUA.