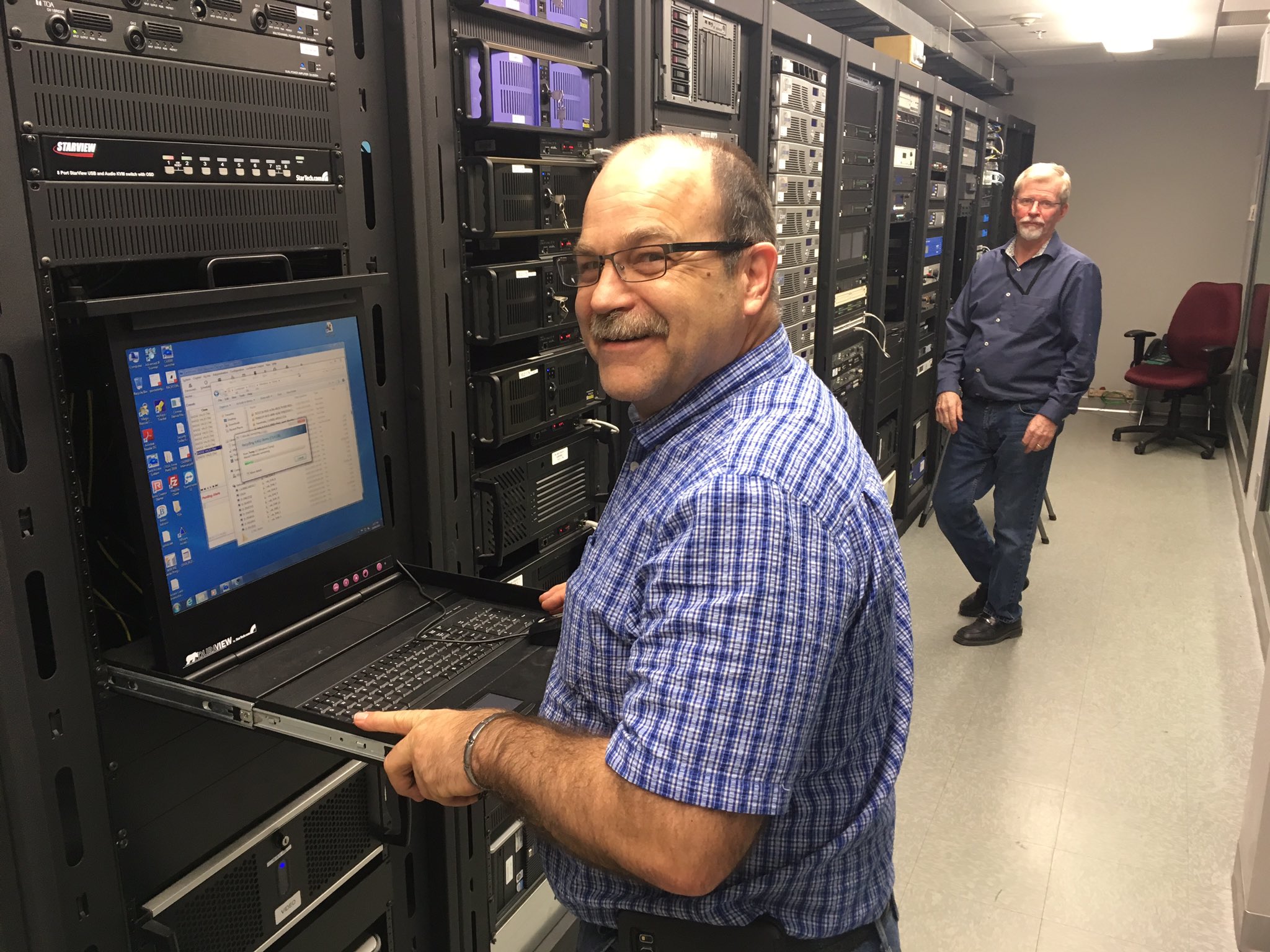 February is Transmitter Tales month at CKUA! The 16 CKUA FM transmitters cover almost the entire province and create a network that connects a community of musicians, announcers, and listeners. Our transmitters comprise a key resource of CKUA’s infrastructure, costing approximately $750,000 each year.

Yet for many of us, they remain a mysterious and magical force that we don’t quite understand. So over the next month we’ll be sharing Transmitter Tales with you, so you can find out more about how they work (or don’t work!).

We hope you enjoy hearing all about our Transmitter Tales. Here’s another one!

Who doesn’t love a good road trip? Rolling peacefully along the highway, snacks at hand, music pulling you along as the scenery slides past…ahhh…

You might be surprised to discover that road trips are a regular part of keeping CKUA safely on the air. Our engineering team–Rod Setter (pictured above, in the background) and Don Haberstock (pictured above, up front)–often find themselves jumping in a vehicle to travel hundreds of kilometres on a transmitter signal rescue mission.

Though CKUA’s intrepid team of transmitter monitors are often able to solve basic transmitter problems, once in a while a bigger issue crops up. Of course, the greatest scourge of radio is when the signal goes off the air. When it happens, there is no time to lose! Rod and Don, on very short notice, often find themselves hurtling down the highway (at a safe speed, of course,) towards the transmitter-in-need.

Once Rod drove from Edmonton to Grande Prairie and fixed the transmitter there only to have an issue crop up in Medicine Hat. Roughly 2,000 km later he made it back to CKUA’s Edmonton headquarters. We’re talking many, many an hour spent watching trees zoom past.

Obviously, CKUA itself is the go-to radio station on such drives. However, no one can deny the value of a solid road trip playlist. Rod has been taking these drives for over 40 years, though, and Don for nearly 20. They need fresh ideas! To that end, we are putting together a Rod and Don Transmitter Rescue Road Trip Playlist. If you have a go-to road trip song, send it on over! We’ll put the list together and share it for all you road-trippers at the end of the month.

If there was a situation at the Red Deer transmitter (the closest after the Edmonton site,) they’d only need about an hour and 40 minutes of music. But what if all the transmitters went down, one after another? (Heaven forbid…) It would take nearly 40 hours of driving! We’ll keep the playlist shorter than that but still, they need plenty of suggestions. Send your best to mrodgers@ckua.com. Then, stay tuned for the official list.