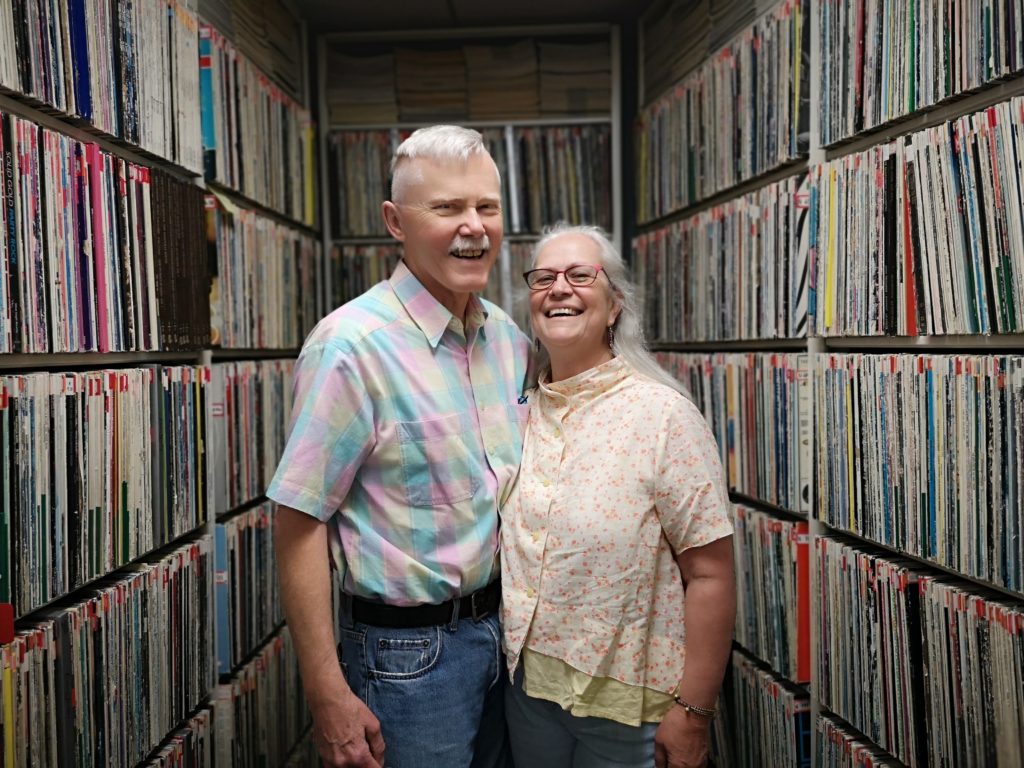 Carla Gannaw’s legacy can be found in almost every corner of the CKUA library, amidst the endless shelves of records and CDs.

This devoted volunteer has given literally thousands of hours to CKUA over the past 22 years.

From the radio network’s former home in Alberta Block – where the library lived on multiple floors – to its current swish setting in the basement of the Alberta Hotel, Carla has touched almost every aspect of library operations.

She had been a long-time fan of the radio network when a friend roped her into volunteering during the 1996 Fall Fundraiser.

“My husband calls me a music-aholic,” Carla says. “I don’t play anything but I’m a listener and an appreciator.”

She started out as a fundraiser library runner. In those days, when a donor requested a song, volunteers had to physically run to the library, track down the record and then bring it back to the host to play.

“It was just right up my alley, it was fun,” she says. “People would request everything and anything. It often involved a lot of sleuth work to find things.”

By the time the fundraiser was over, she was hooked. She asked the librarian at the time, Lee Onisko, what else she could do to help.

This was the start of a commitment that saw Carla doing a weekly stint at the station and numerous shifts during fundraisers, for 22 years.

She and her husband Randy Jordan – both IT professionals – were soon spearheading major library projects.

This included creating a database and scanning system for the metadata – artist, album and song – of every LP in the library.

“It took us a few years to get it all done,” Carla says. “But together with a group of other volunteers and summer students, we did it.”

Another project was upgrading the existing, outdated database, PC File, with the new system renamed ‘CaRa’ by library staff, for Carla and Randy.

“It was just fun to work together,” she says, of heading up library initiatives with her husband. “We could use our knowledge of IT and find ways to improve things.”

Carla was an invaluable source of knowledge for a new librarian, says library tech Arianne Smith-Piquette, now an eight-year CKUA veteran. “She had handled so many projects, been involved in so many things. She knew it pretty much inside-out.”

Carla and Randy never just sat back and waited to be told what to do, Arianne adds. “They were always thinking about where we were and where we were going as an organization and what they could do to make a difference.”

Now, it is time to say goodbye. Carla is taking a well-earned retirement from volunteer duties.

She will be missed, says Arianne. “The CKUA library wouldn’t be the same without her. It sounds clichéd but it’s true.”