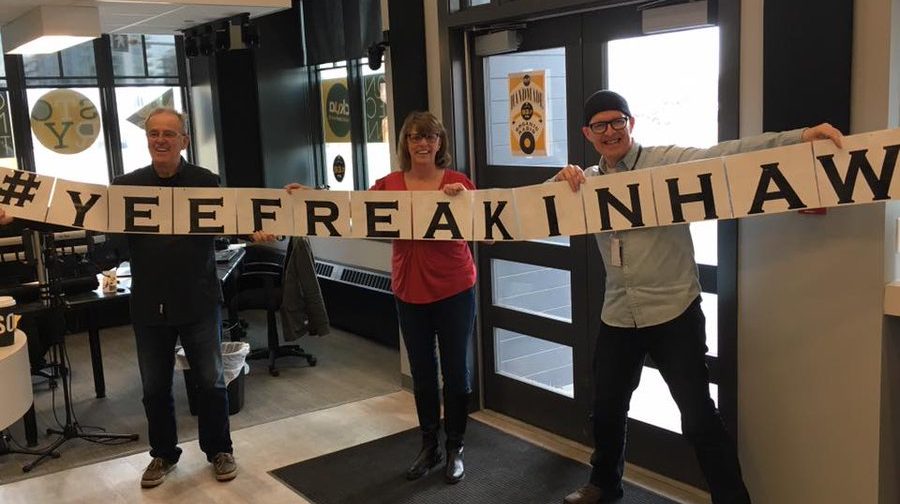 Please join us for a special on-air tribute to David Ward, hosted by CKUA’s Kodi Hutchinson, Oct 20 from 6:00pm to 8:00pm.

In case you missed it, hear the special on-air tribute to David Ward OnDemand. Available only until Oct 26.

Tune in to hear archival recordings of David Ward, sharing songs he loved throughout his many years at CKUA, along with memories from colleagues, fans, friends, and family.

Until then, here are a few more stories that have helped us remember that special twinkle in David’s heart and eyes.

“David and I had a great friendship for over 40 years.  We got along famously from the get-go.  We could make each other laugh a ton and discuss anything and everything under the sun. We shared in some really poignant experiences together too, like spontaneously running into Joni Mitchell on the rooftop lounge of the Hotel Macdonald in downtown Edmonton. There we were, just the three of us. Mind-blowing!

David, when you get the chance, say hi to Monica and Bill and Jack and Sev. Give them all some of this love we share with you, and we’ll meet again down the road a bit, okay?  Until then my friend, Godspeed.” – Cathy Ennis, former CKUA host

“Years ago, I worked as a film programmer with Metro Cinema in Edmonton. One of the amazing things about that job was when a special event would hold an audience enraptured.

In 2000, a movie came out entitled O Brother, Where Art Thou?, directed and produced by the fabulous Coen Brothers. The movie is set in Mississippi in 1937 at the time of the great depression, and it involves the hijinks of a handful of not very good criminals. Beyond the plot, the film did a lot to popularize bluegrass music. So much so that a collection of hot players came together to play for a film called Down from the Mountain. I brought that film in for one night along with a bluegrass band who were cleverly dubbed, Lonesome and Then Some. The evening was an amazing feat, the theatre was packed, and the live band proved to be the jam to the film’s peanut butter.

After the last kernel of popcorn was swept up in the theatre, one of the guys in the band ambled up to me and we started talking a little about music. I confessed to being mostly ignorant about bluegrass as a genre, and this guy, David Ward was his name, asked what kind of music I liked. Trying not to sound too pretentious I said something like, “jazz, fusion, that stuff.” Before I could take another breath, names spilled out of his mouth like Pastorius, Hancock, McLaughlin, Airto.

Over time I would come to learn about David Ward’s childlike wonder in his willingness to absorb new music. He had a chameleon-like demeanour that allowed him to understand deeply and invest spiritually in just about genre of music. But unlike a chameleon (no he didn’t eat bugs) he wasn’t just about changing with his environment, rather he created colours through his love of music.

May your magic live in the mystical musical ether forever, Mr. Ward. You were one of the good ones!” – Tony King, CKUA host 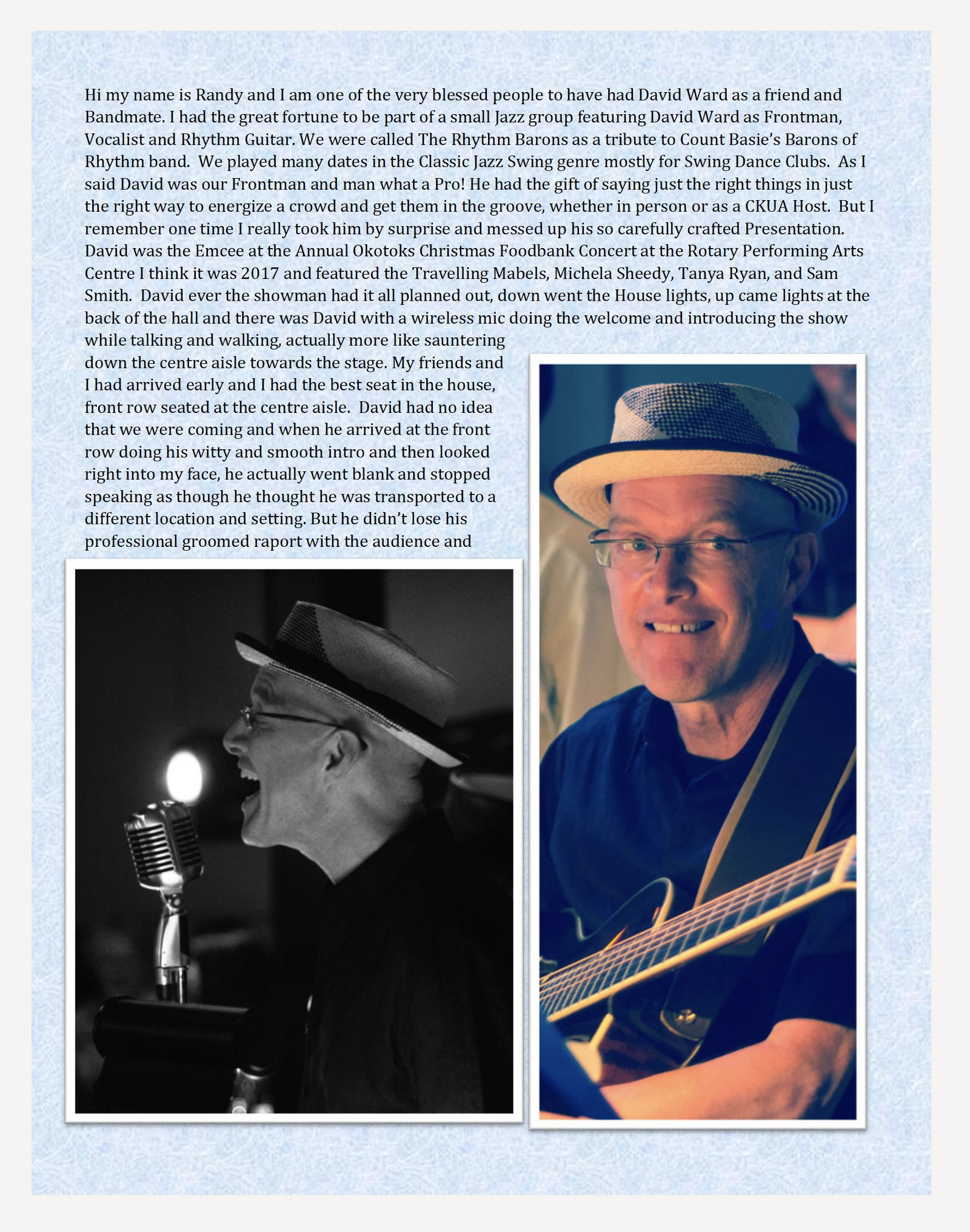 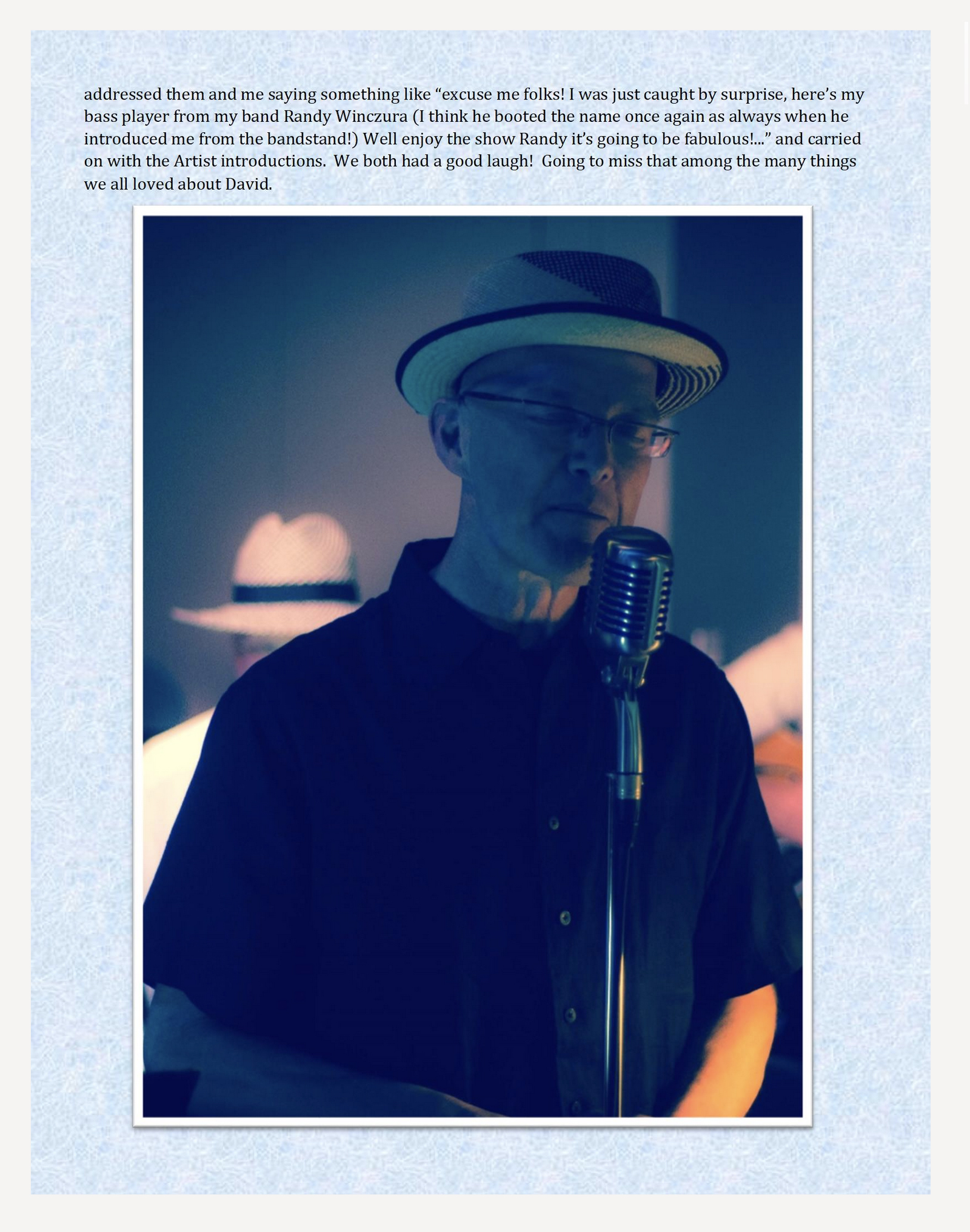 We invite you to continue to share your thoughts, memories, and stories of David.

You may also wish to share a story through audio:

OpenMic feature on the CKUA app (30 second max)
Voice memo (record on your phone) and email to tribute@ckua.com

We thank all of the people who have started to add their own voices to the chorus of people who are remembering David fondly. David loved this community and believed in the power of togetherness and music. We hope that as we grieve together, this community will sustain us.

Mark your calendars! Please tune in for a special on-air tribute to David Ward, hosted by CKUA’s Kodi Hutchinson, Thursday October 20 from 6:00pm to 8:00pm.