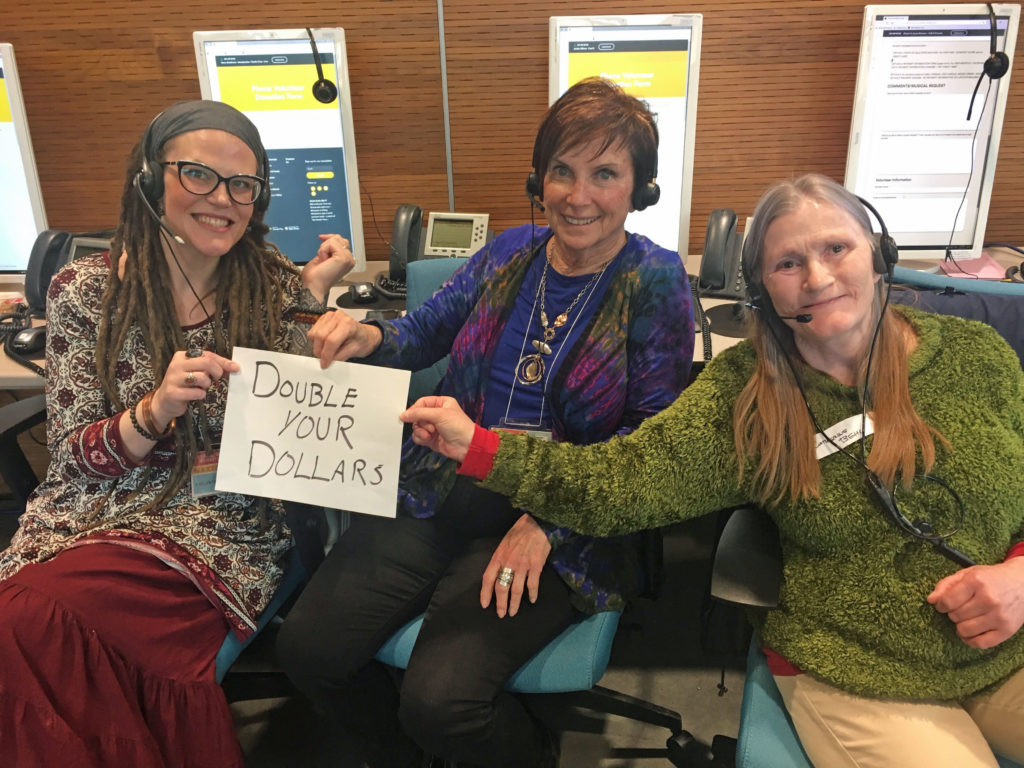 It’s a quiet moment in the CKUA fundraiser pledge room. But suddenly, all the phones are lighting up. The bell is ringing non-stop. Volunteers are running around to keep up. What’s happening? It’s a Double Your Dollars (DYD) session!

Anyone who calls in during DYD has the value of their donation matched, essentially doubling it. These moments always boost energy and excitement, sparking a flurry of donations. But how does it work?

It works thanks to CKUA’s Leadership Donors. These generous supporters donate a minimum of $550 each (often it’s much more) before each campaign. These funds go into a pool used to match every donation during a DYD shift.

“Leadership donors stand up and say that it’s important that we charge forward with a really confident first step towards our fundraising goals every six months,” says Marc Carnes, CKUA CEO. “By saying ‘I believe in CKUA and how important it is,’ they inspire other people to do the same.”

One of those donors is Bert Montgomery. In 1997 he was often on the road for work and listened to CKUA all the time. He was shocked when the station unexpectedly went silent. When staff and supporters rallied and set up fundraisers, Bert was in.

“I thought, ‘I want to make sure that I’m a link in the chain that keeps this station alive,” he says. “I’ve done it every year since.”

Bert said there was one year when things were tight. The oil and gas industry was in a downturn. “I looked at what I was going to spend on the CKUA fundraisers and I thought, ‘I will let other things go before I let that go,’” he says. “To me it’s as important as putting gas in my truck or food on my table. Not just for me but for everyone who listens.”

Bert’s a great example of a Leadership Donor, says Lesley McMillan, CKUA Donor Relations Officer. “They’re a passionate, enthusiastic, committed group,” she says.  “I really do attribute much of the success of our fundraisers to our leadership donors for getting it going, leading the way and inspiring others.”

The fun part of being a leadership donor is receiving donated hours. Donors get to connect with their favourite CKUA hosts, make song requests and hear their name on-air. Bert has always put his donated hours towards Lionel Rault’s shows.

“We have amazingly great visits about music and life in general,” Bert says. “It’s always fun.”

You too can join the fun! Leadership Donors make a gift of $550 or more – before each of CKUA’s fundraisers – to form the Double Your Dollars pool of funds and receive the benefit of donated hours of programming. For more information about how you can become a Leadership Donor, please contact Lesley McMillan, Donor Relations Officer, at 1-800-494-2582 or lmcmillan@ckua.com.