“She was a very, very gentle person-and even though she was quiet, she had a presence, a strong presence. She was great.”
Merna Mitchell – Member of CKUA Players

Prior to joining CKUA as station manager and first full-time paid employee, Sheila Marryat was already a trailblazer. As the first female graduate of the University of Alberta’s Faculty of Agriculture (now the Faculty of Agricultural, Life, and Environmental Sciences) in 1923, Ms. Marryat was well-versed in the drive and determination necessary to succeed in a male-dominated field. As counterpart to CKUA’s first announcer H.P. Brown, Ms. Marryat filled many roles at CKUA including that of program director, dramatist, lecturer, scriptwriter, secretary, and on-air hostess. Her background and interest in the dramatic arts and adult education were ideal additions to the fledgling station.

Born and raised in England, Dorothy Sheila Marryat was the youngest of nine children to Colonel Ernest Lindsay Marryat and Elizabeth Lynch Marryat. While the Marryat family led a privileged life in England, in 1905, the colonel retired and moved his family to Canada to take up ranching. They settled on the shore of Haunted Lakes, near what is now the village of Alix, Alberta. In her new home, Ms. Marryat soon demonstrated an affinity for farming. In 1918, she enrolled in the Olds School of Agriculture-and upon graduation-attended the University of Alberta. In addition to her agricultural studies, Ms. Marryat was active in the University’s dramatic arts community and was the president of the University of Alberta’s Dramatic Society 1922-23.

“…people should choose what they’re going to listen to and give it their full attention as they would an actual performance. This is the only right use of radio, Miss Marryat feels.”

After graduation, she returned to the Alix area to farm, but in 1927 made her way back to Edmonton where she became CKUA station manager in 1928. Here she put her dramatic arts skills to good use bringing a group of amateur actors together to form the CKUA Players. Under Ms. Marryat’s direction, each week and live on-air, the Players performed works written by local and international playwrights including Elsie Park Gowan, Gwen Pharis Ringwood, and L. (Lawrence) du Garde Peach. These one-act plays not only entertained listeners, but captivated them with stories of great historical figures and fascinating accounts of major events in Canadian history.

Just one year into Ms. Marryat’s tenure at CKUA, two events occurred that would transform Canada’s political and economic landscape forever. On October 18, 1929, the Privy Council of England deemed that women in Canada were indeed persons and eligible to become members of the Senate of Canada. Ms. Marryat’s older sister Irene Parlby was one of Alberta’s Famous Five who worked to advance this case. On October 29, 1929, the New Stock Exchange crashed and the world plunged into the Great Depression. It is important to consider that nearly all of Ms. Marryat’s time at CKUA was during the Great Depression. Radio connected people to news, educational programming, and entertainment at a time when frugality was a necessity rather than an eccentricity. Working on a shoe-string budget, but with a steady-hand and firm leadership, Ms. Marryat brought educational and theatrical productions to life, enriching the life of countless Albertans.

“She was pretty demanding as I remember, but it fit with us because what she demanded was that we do it the right way. I think she gave us good timing in our productions. I remember very much, you had to be on cue…you’d be darn sure not to mess up because, after all, it was all live, you couldn’t correct it, you had no second chance, and she certainly impressed us with that.”

In 1939, Ms. Marryat left CKUA for the CBC in Winnipeg, Manitoba. Her dedication to the development of innovative radio programming, most notably the CKUA Radio Players, highlights the role of women in pioneering and advancing radio as a medium of communication and entertainment. As a long-standing voice for Albertans, CKUA recognizes the significance of Sheila Marryat as a pioneer who helped to shape our modern radio experience.

“There was a wonderful woman in charge at CKUA, and that was Sheila Marryat. I can’t speak strongly enough about the leadership that Sheila Marryat gave. She was an Englishwoman of the upper classes-using the term in its best sense. She was gentry-an aristocrat if you like. And she had high standards of everything-in drama and in music-nothing shoddy or cheap ever got on the air when Sheila was there!” 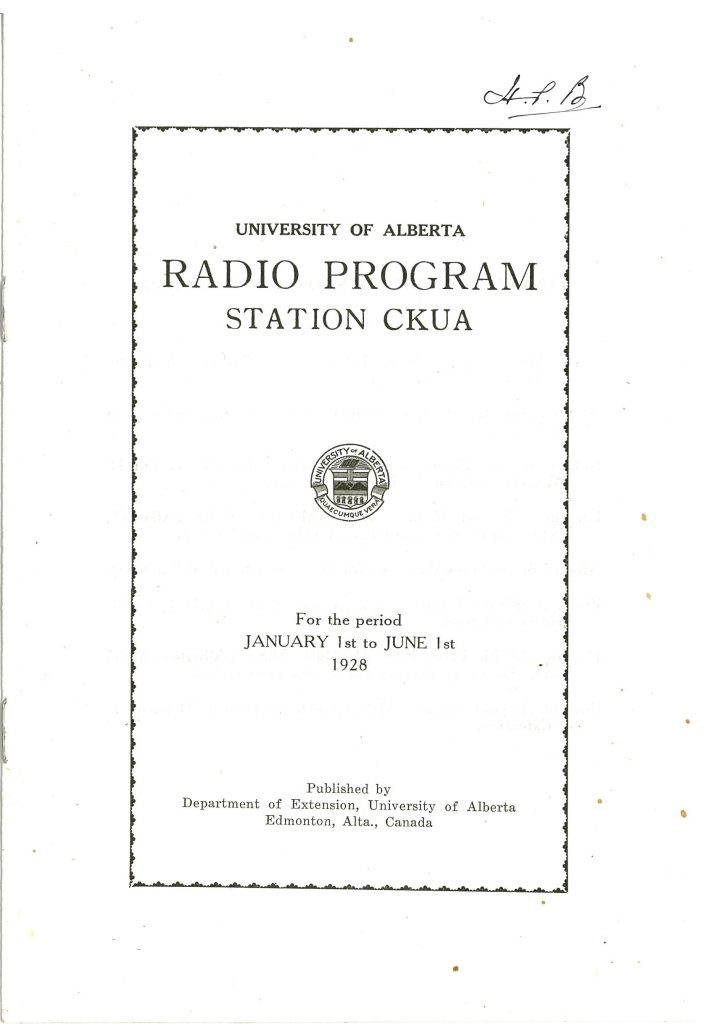 Created with the support of the Edmonton Heritage Council