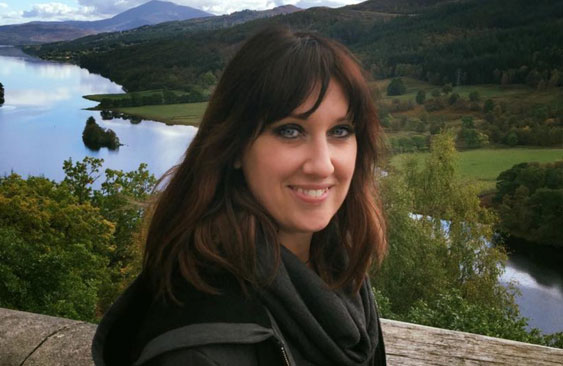 Meet our new drive time host, Lisa Wilton! Though Lisa is not new to CKUA, she is sliding into a new spot on the schedule – 4 to 6 pm. While we’re sad to say goodbye to Hayley Muir, whose exceptional energy and knowledge kept that spot rocking for the last three years, we’re psyched to see Hayley continue her radio adventure as she takes on the role of Musical Director for CJSW, the University of Calgary’s campus station.

You’re in good hands as Lisa takes over to guide your musical afternoons. Get to know this witty, wonderful Calgary-based journalist and broadcaster more (including the one weird song she can’t stop humming).

How long have you been with CKUA?

About three years. My first episode of The Takeaway was in April, 2016.

I can’t think of an absolute favourite moment. But I’ve had some fun Fundraiser shows. I really enjoyed co-hosting with Calgary musician Brooke Wylie. I’d never met her before and now we’re good friends.

It was also a thrill for me to interview The Grapes of Wrath. My 17-year-old self would not have believed it.

When did you start listening to CKUA? What do you love about it?

About 15 years ago, I think. My mom always had it on in the kitchen and she loved The Celtic Show with Andy Donnelly.

I love how passionate people are about CKUA. When I meet listeners they are always so excited to talk about the station and share their musical discoveries that were made through CKUA. Also, the amount of care each announcer puts in to crafting their program and choosing what songs to play is pretty incredible and inspiring.

What’s the oddest moment you’ve ever had with a musician or guest?

Well, I’m still relatively new here at CKUA so most of the guests I’ve had on my shows have been cool. But years ago, I was working for The Calgary Sun as an entertainment reporter and I went to a downtown Calgary hotel to interview Eartha Kitt, who was starring as the Wicked Witch of the East in the touring version of The Wizard of Oz.

She sat stone faced for the first 10 or so minutes of our 20-minute interview. She may have even sneered once or twice. I tried not to cry.

I can’t remember what I said, but I think I cracked a joke and she suddenly threw her back and burst out in this deep-throated laugh.

After that, she was totally lovely and we had a great interview. I found out later, she did the exact same thing to The Calgary Herald interviewer. I think she just enjoyed making journalists uncomfortable.

Out of everyone alive in the world, who would you want as your cohost for one special show? Why?

Hmm, there are a lot of people I’d love to have has my co-host. But I suppose I’d pick either Noel or Liam Gallagher (formerly of Oasis.) I think they’d pick out some great tunes, and they’d be hilarious. Although, I’d probably have to keep reminding them to not swear.

What’s the one weird song that is constantly stuck in your head?

“Una Paloma Blanca” by the George Baker Selection. I’m as perplexed as you are.

Have you had any moments of pure panic as a radio host? What were they?

My very first time on the board by myself, I’d played one or two songs and then all of a sudden, the computer screens went blank and there was no sound coming out of anything. It was like the whole console shut down.

I basically froze because I had no idea what to do.

Luckily, the fabulous David Ward was in the studio with me and touched base with the techs in Edmonton, who eventually got us back up and running again. But yeah, pure panic is a good way of putting it.

How did you get your start in broadcasting?

Do you have a go-to snack that everyone else thinks is weird?

I like dipping a fresh piece of white bread into chocolate milk. I started doing it when I was a kid after I saw something on a TV show about how it was a Mexican treat. But I just Googled it and I see no mention of this particular delicacy. But there is such a thing as Mexican Hot Chocolate Bread, so I’m beginning to think I just misunderstood it the first time around.

What are you looking forward to when you take on the drive show?

I have the pleasure of sharing the music I like and love with listeners and hopefully making their day a little better. I’m quite well versed in music in general, but I’ll be working very hard to expand my own musical knowledge so I can offer CKUA listeners even more variety.

How and when did your love of arts/culture/music  begin?

My grandfather wrote and produced a radio show called The Celtic Heart on CBC Radio in the 1940s and ‘50s and had a huge vinyl folk music collection. My mom was also a fan of Celtic music, so I grew up listening to a lot of that.

We weren’t a musical family in terms of playing instruments, but there was always a radio on or a record playing somewhere in the house.

In high school, I hung out in the photography studio and drama room whenever I could. My parents were not particularly supportive of my short-lived dream to become an actress, but they encouraged my interests in arts, film and travel.