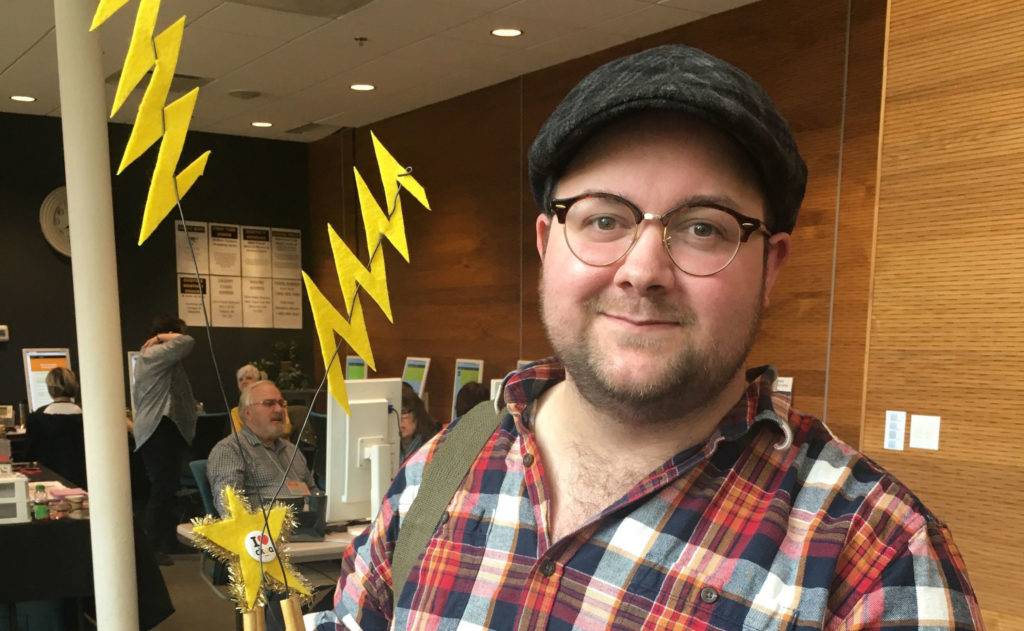 Joe Kelly moved to Alberta four years ago. It only took him a month to discover CKUA. Once he did, there was no going back.

“I turned on the station and Grant Stovel was playing The Budos Band. That, and the way he spoke about the music itself, had me instantly hooked,” says the Placentia, Newfoundland native.

A donor since 2016, Joe became a monthly donor in the recent Spring Campaign. It was Tower Tuesday — after he donated, he heard that another $180 was needed to ‘scale’ the top of the transmitter tower in Fort McMurray, Joe’s adopted home. He called in again to donate the full amount. Then, several days later he drove from Fort McMurray to Edmonton to attend the CKUA Open House, where he donated for a third time.

“I met Grant and I shook his hand and introduced myself. And it wasn’t ‘oh hey, it’s nice to meet you.’ I got literally a giant bear hug,” says Joe. “It’s that sense of community and family that comes with being part of CKUA. I just felt compelled to donate again.”

So, Joe gave a fourth time, during Spring Campaign 2.0 – CKUA’s encore fundraiser to make up the final four weeks of program funding needed after a shortfall in the major spring campaign. He even become a Leadership Donor with a donation of $550.

“It’s worth it. Every penny is worth it,” Joe says. “I’m a lifelong learner. I paid an astronomical amount for university and college and if I’m getting the same kind of educational experience from CKUA, I feel compelled to make my contribution.”

His work schedule – and the fact that he mostly works alone – means he’s able to soak up at least eight hours of CKUA per day. He always keeps a journal nearby so if he hears a song that catches his attention, he can write down a few notes and look it up later.

“I think the thing I love most about CKUA is not only the community and the passion surrounding it but the educational experience that comes along with it. I used to think I was well-versed in music and when I started listening to CKUA I realized I knew nothing,” he says with a smile.

As for the community aspect, Joe had a moment two years ago that sums up the magic CKUA creates. He was home on vacation in Newfoundland. “I was walking down the street and there was a person walking towards me wearing a CKUA t-shirt. And I said, ‘hey! CKUA!’ And he said, ‘yeah!’ And we high-fived. And we just kept on walking but there was that connection – that we understood something that others didn’t.”

In the past four years, what he describes as the “adventure” of CKUA has become indispensable. It’s partly why he is so diligent about donating. “Life without CKUA is a kind of life I don’t want to think about,” he says.