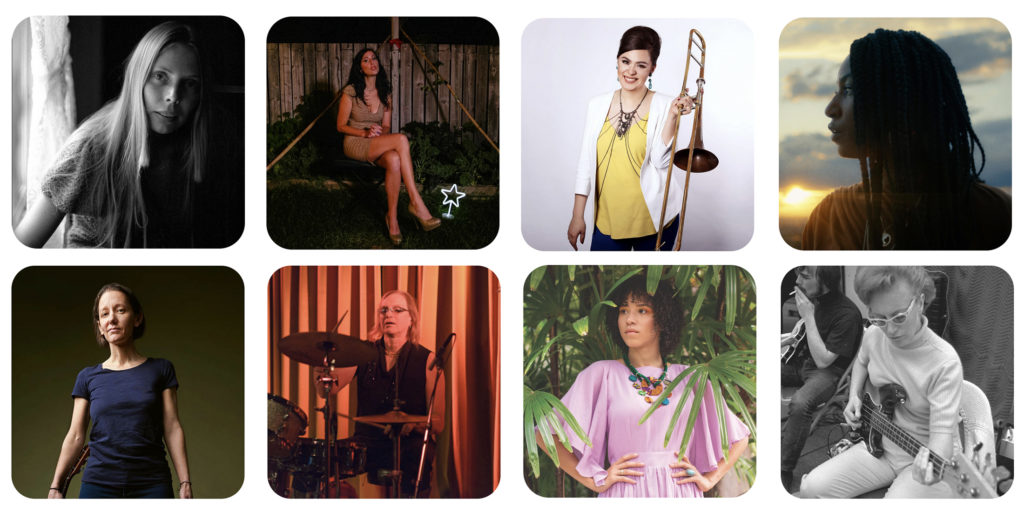 March 8 is International Women’s Day, and we are celebrating women in music, arts, and culture. This week, CKUA hosts are welcoming special guests, spinning great music, and shining a spotlight on some accomplished artists. Here are the details:

Coming up on an International Women’s Day edition of Alberta Morning: The Secretly Female History of Popular Music. We’ll share stories about some of the instrumentalists, singers, songwriters, producers, and technical innovators who helped shape the sound of popular music over the last 100 years. Joining us to help tell this story and share a few choice pieces of music will be some musical luminaries who are CKUA favourites!

In the 6 AM hour, celebrated Alberta singer-songwriter Dana Wylie will spin us a Women of Folkways Records guest DJ set. For the 7 AM hour, Edmonton Music Prize winner Audrey Ochoa will pop in to share music by a few of her favourite female artists. And in the 8 AM hour, we’ll hear a portion of the brand-new Hidden Track podcast episode!

Mid-Morning is hosted this week by CKUA’s Leo Cripps, and he will be joined in the 9 AM hour by Michelle Josef, who is the drummer for alternative country “supergroup” Hey Stella!

Over in the land of Thoroughfare, we’ll hear from multiple women who have helped to define their respective genres. In the first hour, Tony King will be profiling renowned guitarist and bassist Carol Kaye. Carol Kaye was attempting to cut her teeth in the world of jazz as a guitarist when inadvertently she volunteered to pick up the electric bass for a studio call in the late 60s. From that point on, Carol found herself featuring on hundreds of tracks from soundtracks of iconic TV shows to notable recordings like The Beach Boys’ Smile Sessions—which, according to Wikipedia, she also contributed to by playing the banjo.

In the second hour of Thoroughfare, Tony will be joined by Edmonton-based singer-songwriter Ann Vriend. AV’s career could have gone in many directions; while other kids were hanging out with their friends getting into mischief, this acclaimed artist was practicing the piano in her parents’ basement. Fate could have directed her into a more commercial music path, but her upbringing, characterized by social-political discourse around the dinner table, led her down the path of being a fierce proponent of the underdog. Ann Vriend makes her home in the Boyle-McCauley neighbourhood in Edmonton, and during the pandemic she chose to make life better for the marginalized souls in her community by hosting a series of Front Porch concerts on Sunday afternoons. AV will share more of her amazing story and a handful of music picks with us.

Here’s what you can hear on Tuesday’s International Women’s Day edition of Classic Examples, with Mark Antonelli:

We’ll end the program with the Symphony in E-flat, Op. 32, from 1894, (“The Gaelic Symphony”) by Amy Beach, the first symphony to be composed and published by a woman in North America; we’ll hear the premiere recording of an Oboe Concerto from 2005 by the Pulitzer Prize and Grammy Award winning composer Jennifer Higdon, a piece she says highlights the instrument’s beauty and grace. Also: music by the French composer Cecile Chaminade, her Concertino for Flute played by Sharon Bezaly on her 24-carat gold flute (!); music by Germaine Tailleferre, her Harp Sonata from a recording by Sarah Schuster Ericsson; and by Fanny Mendelssohn, her String Quartet courtesy of the Takacs Quartet.

Be sure to check out these related stories:

The High Standards Quintet on CKUA