Do you have a 200-300 word story about you and CKUA that you’d like to share with us? Please let us know by writing us. We’d love to feature it! What do such stories look like?

Well, here’s one by the host of Magnetic North on CKUA, Meg Wilcox, whom Avenue Magazine in Calgary recently included on their Top 40 Under 40 list! 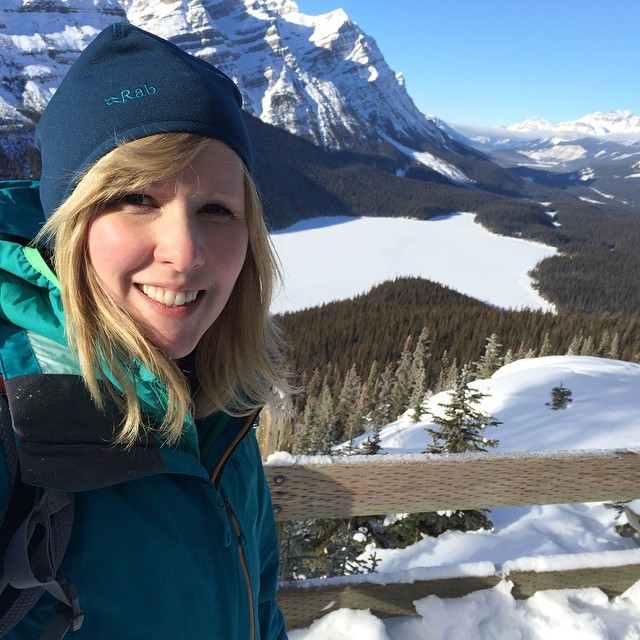 My introduction to CKUA was in the late eighties, in the basement of the Alberta Culture building in downtown Edmonton—though I have to admit, I don’t remember much of it!

My dad, Tom, worked at Beaver House, where he spent his days developing, mounting and packaging art shows that would travel across the province. It was around 1986 that he discovered CKUA—one of the few stations he could get on his radio in the basement, but also a nice break from talk radio.

He remembers classical music in the afternoons that made the perfect soundtrack for framing paintings. While I didn’t spend too much time in the studio, I do have memories of the occasional day where I’d get to go to work with Dad, very happy to be doing my own “work” as well, listening to the radio while drawing at the big, high tables.

Radio was a constant in Dad’s many art studios over the years, and perhaps it’s part of the reason I gravitated toward it during my Journalism degree. After graduation, I travelled across the country, working in at least 10 different cities and even more stations, producing and hosting radio news, current affairs, and music—though the music gigs were always my favourite.

In 2014, I moved back to Alberta to build Banff Centre Radio. We were developing a current affairs and information station that was rooted in the Banff Centre’s work in arts and culture, and my Dad suggested I check out CKUA. One mid-day morning (or dare I say Mid-Morning?), I found the station on the radio in my little Honda Fit: it was Baba, telling a story about an elevator and then playing Thievery Corporation. I instantly knew I’d found my people.

When Banff Centre Radio’s funding was cut, I moved to Calgary and continued to work in radio, and it wasn’t even a year, before producer Elliott Garnier brought me in to take over The Label, a show that looked at the back catalogue and the backstory of major imprints. It was so thrilling to travel up to the CKUA studios in Edmonton and meet all of the hosts I’d been listening to over the past two years (yes, Baba included!). The interviews I did for that series are still among my favourites. One of my first guests on the show was Holger Petersen, and he helped me craft such a tight and brilliant hour on the history of Stony Plain Records that my only regret is, we didn’t make it two.

Now, I’m hosting Magnetic North on Saturday nights at 9 PM (MST), and the show’s Canadian-driven playlist feels a bit like coming home to the music programming I did at the CBC, earlier on in my radio career. Having lived and travelled across our country several times over, I love sharing the music from places that hold a special spot in my heart, and I love being able to promote new and talented Canadian artists.

Thanks again for sharing this story about you and CKUA Meg, and congrats on your recent acknowledgement!

Please email us if you would like to share your own 200-300 word CKUA story with our community!