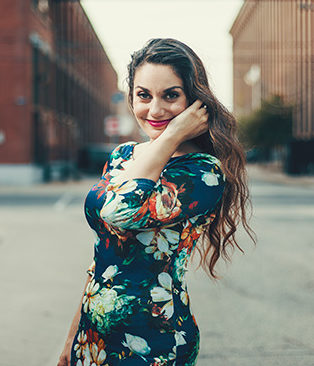 Juno-nominated soprano Miriam Khalil has established herself as one of Canada’s most versatile and expressive performers. She has become increasingly known for her non-traditional performances of opera, art song, and concert repertoire.

On Sunday, March 20, she will be a featured performer in the Edmonton Chamber Music Society‘s concert entitled An Evening in Spain.

We asked Miriam five questions to learn a little bit more about this dynamic musician.

1) How old were you when you started taking singing lessons, and when did you know that you wanted to be a musician as a career?

I started taking singing lessons consistently at 14. I always wanted to be a singer, but I decided I wanted to make a career in music when I was 18 and graduating from high school.

2) You’ve appeared in a range of productions and roles. What is your favourite operatic character, and why?

I have many favourite roles, but my favourite thing to sing is a song cycle by Osvaldo Golijov called Ayre. It is a one-person song cycle with 5 different languages that co-existed in Spain in the 1400s. It’s a group of eleven folk songs, lullabies, prayers, and poems all intertwined with eleven musicians and electronic music. I love these songs because they each require such a different sound and colour and whenever I sing them, they challenge me to grow as an artist and discover new ways of making sound.

3) You joined the Faculty of Music at the University of Alberta last year. Can you tell us about your work there and what you like about teaching?

I joined the Faculty of Music at the University of Alberta and started officially teaching voice there in September. I teach singers how to sing more easily and expressively while helping them find their authentic voice and supporting them in discovering what they have to say as artists. I love working with my students and watching them grow in their knowledge of their technique and artistry. It is extremely rewarding to see them develop as musicians.

4) What do you do to keep your voice in shape and ready to perform?

I practice regularly and work on upcoming repertoire for engagements that are ahead. I also still study with my voice teachers and coaches whenever time permits.

5) What will the Edmonton Chamber Music Society’s concert called An Evening in Spain include?

We are performing songs, lullabies, folk songs, and music that originated in Spain, whether through the language, tradition, or music. We’re going to have music by Obradors, Osvaldo Golijov, Manuel Morante, Turina, and Arbós.

Be sure to see Miriam at the Edmonton Chamber Music Society’s Spring Equinox Festival, March 19-24.