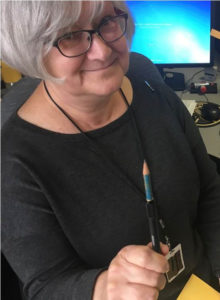 Lorna Stevenson keeps a special bowl at her desk, filled with pencil stubs. We’re talking at least 20 of them. As CKUA’s senior accountant, she has access to all the pens and pencils she could need. So why the bowl?

“I guess working at CKUA you get a little crazy,” she laughs. As an accountant at a donor-funded radio station, she says you end up hyper-aware that every dollar donated is important. Constantly looking for ways to save — on scales both grand and small — she has been systematically working her way through the pencils for years. She even has a special holder that makes the stubs easier to manipulate.

“My mother died quite a few years ago and when we cleaned out her house, we found a drawerful of pencil stubs which date back to … well, I found the 1967 Centennial pencil in there.”

“I resolved to use up every single last one of those pencils.”

Lorna has been working in the CKUA accounting department since 2009. “I enjoy it,” she says. “It’s creating order out of chaos, that’s basically what an accountant does. And making everything balance.”

Starting out working in a medical office and then moving to court reporting, she says she’s happy now to be immersed, professionally, in the arts world.

It’s one she’s long been familiar with. Lorna’s dad played trumpet, saxophone and clarinet in the Al Breault Combo, a dance band in Edmonton. “So while everybody was listening to Dylan and the Beatles, I was grooving to Benny Goodman and Tommy Dorsey. I was kind of a weird kid.”

She discovered the alternate universe of radio at 13. “I got a radio for Christmas and I would listen to jazz on CKUA while I was supposed to be sleeping,” she says. “It was so unusual and rare that I felt like I was in on something that nobody else knew about.”

CKUA’s programming continues to give her that feeling. 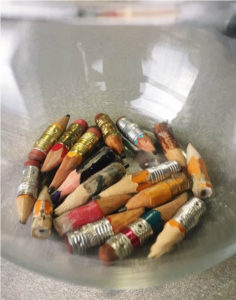 “Over the years CKUA has given me little windows into new places to go musically.” One of the most recent windows flung open was opera. “I’ve been struggling with it for decades,” she says, but finally something clicked.

From her vantage point as CKUA’s frugal finance maven, does she have any final words to share? “I think it’s that we know every single dollar that we get was hard-earned and we don’t waste them.” Just like the pencils.