Over the past week, we’ve seen tributes on social media from Brooke Wylie, Dave McCann, Ellen Doty, Jess Knights, Maria Dunn, and many more. Musicians in Alberta and beyond knew that when David Ward talked about your show, mentioned your album, or gave your newest song a spin, he was in your corner, cheering for you.

When Wordfest CEO and Creative Ringleader Shelley Youngblut invited Robbie Robertson to Calgary in 2016, she says, “I knew David would be the perfect person to help him shine. David would always put others in the spotlight, and we all knew how lucky we were to have him. A lot of people felt that authentic connection with him. How could he have been that good to all of us?”

And when David welcomed famous guests into the CKUA studio space, his excitement was genuine—and contagious. A 2016 visit from a Canadian legend prompted this response from David: “What a memorable afternoon in conversation with the one and only k.d. lang! She graciously accepted the invitation to help CKUA with our fundraising efforts by spending 90 minutes with us…She testified on our behalf and encouraged other listeners to pitch in and help. Relaxed, open, kind, present, funny, and generous with her time when anyone asked for a photo or autograph. Thank you, k.d.!!”

We’ll never know how many touring, emerging, and performing artists were encouraged by David, because much of his work was behind the scenes, but it’s been lovely to hear from musicians and artists who were boosted by his enthusiasm and professionalism.

Some CKUA hosts and staff have shared their thoughts this week about working with David.

Lisa Wilton says, “I don’t really know to express how much of an impact David Ward has had on my life over the past few years.” She recalls how David was there when she started as a host. “I can’t tell you just how helpful and supportive David was as I tried to improve. I know there were times he was frustrated with me, (he had a ‘disappointed dad’ voice that gave it away), but he would also let you know when you nailed it, by literally bounding out of his office/production studio, pointing at you and yelling, ‘Nailed it!’”

Keri Rak recalls the same blend of exacting standards and kind encouragement: “When I first started hosting Saturday Morning, he counted how many ‘uh’s’ I said in one break, which at first made me feel defensive. But after we talked, I immediately moved from feeling defensive to feeling encouraged and supported, armed with strategies to improve. I got that he just wanted good radio, for me, for the station, for the listeners, all of us. He was great at getting the best out of you.”

Aaron Au remembers his start at CKUA this way: “When I first entered the world of radio, it felt like a magical yet daunting place. David made me feel instantly at home. As I got to know him, what impressed me was not only his dedication to the craft but his dedication to people. Even after his cancer diagnosis changed his plans, he continued to stay in touch with words of encouragement and correction. Through it all, I knew that he cared for not only the well-being and integrity of CKUA but for me as a person. I always felt cared for and heard. He was always so generous with his time, his encouragement, his hard-won wisdom and his kindness. Although I only knew him a year, I already deeply miss my incredible mentor and good friend.”

Kodi Hutchinson said, “He was able to help people in a way that you felt he believed in you and was rooting for you. I started at CKUA because I wanted to try and be like Bill Coull; I soon realized I needed to be like David Ward. He was and still is my guiding light for how I ‘do’ radio and much more.”

Arianne Smith-Piquette, Production Services Supervisor, says, “David and I had similar beginnings working in the CKUA library; we bonded over the hidden gems in the CKUA collection, and David’s belief that the library held the heart of programming. Watching David in action, whether during fundraisers or live events, was intense. His passion for CKUA was unrivalled, and only exceeded by his dedication to mentoring and developing on-air talent. There are countless stories of how David’s mentorship and support shaped the lives of many artists and announcers, both at CKUA and beyond. David’s legacy will be this mentorship of others, and he will be sorely missed.”

As we struggle to come to terms with this loss, our sadness is acute because we will miss David’s talent, expertise, and joy. We also feel some measure of comfort, however, because we know we were learning from the best, and we were lucky to have had that time with him. As one of our hosts said, “Now we need to support each other the way he supported all of us. ”

Ken Regan, CKUA’s CEO from 1999 to 2017, notes that he and David both started working at CKUA in 1982. “He and Monica and I were close friends as well as co-workers. And I guess one of the things I will always remember and cherish about Dave, because I think it was something I admired, was his deep, deep desire to be learning.” Ken adds, “He was full of life and more often than not, full of the joy and wonderment that life can offer.”

A few years ago, David made Grant Stovel an offer he couldn’t refuse: “If you can pick me up at 5:30, I’ll come pitch with you and answer phones for the first hour of the morning show each day.” Grant recalls, “So there he’d be, in the pre-dawn dark, jumping in the car with me, waaay too on the ball for 5:30am, head full of ideas and excitement. We’d have a ton of fun sharing the six o’clock airwaves, and whenever the phone rang, he’d race across CKUA’s Performance Space to answer it.

When we read the words of all the hosts who are remembering David, we’re struck by the extraordinary depth and breadth of knowledge he displayed. He searched for classical treasures in the library with Mark Antonelli, he talked Jazz with Kodi Hutchinson, and he encouraged Allison Brock to explore every style and era of country music. He had Tom Coxworth and Andy Donnelly convinced he was all about the folk tunes, but he could talk Brit pop with Lisa Wilton, too. As Tony King said, “Over time I would come to learn about David Ward’s childlike wonder in his willingness to absorb new music. He had a chameleon-like demeanour that allowed him to understand deeply and invest spiritually in just about every genre of music.”

There is more than versatility and curiosity in the range of David’s musical knowledge, however. There is kindness, too. Like a schoolteacher who could make every student feel like her favourite, David wanted every person to feel seen and special. He made a point of asking what you were listening to, what you were working on. We’re going to miss him terribly here at CKUA. Thank you to all of you who are getting in touch to share your own stories, memories, and kind wishes. We’re treasuring them, and we’re making plans for special tributes, on and off the air. 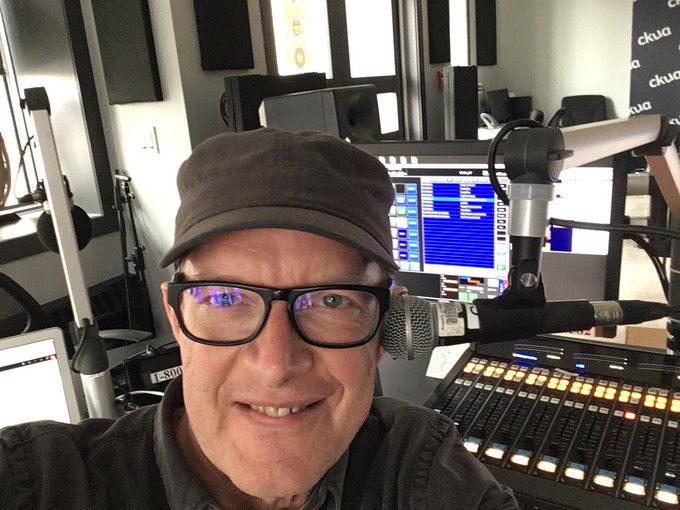 We are all still shocked and saddened by this loss.  Please continue to visit our website, where we will be sharing additional information as it develops, including plans for on-air tributes and musical programming.

We invite you to continue to share your thoughts, memories, and stories of David.

You may also wish to share a story through audio:

OpenMic feature on the CKUA app (30 second max)
Voice memo (record on your phone) and email to tribute@ckua.com

We thank all of the people who have started to add their own voices to the chorus of people who are remembering David fondly. David loved this community and believed in the power of togetherness and music. We hope that as we grieve together, this community will sustain us.