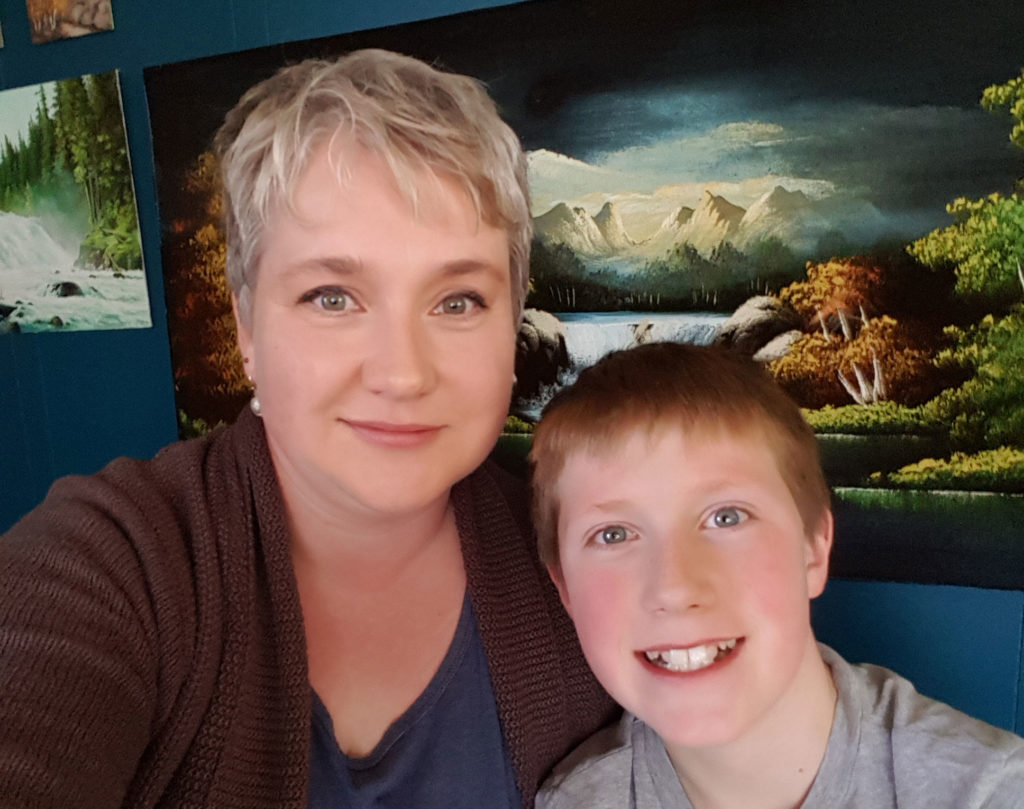 Collin Parent is a true-blue CKUA fan and volunteer. Whether on phone shifts or helping with hospitality, he’s punctual, professional and courteous.

“I really like volunteering with CKUA,” says the freckled Grade-Seven student. “I get to listen to all the music personally and I get to meet all the people who are there working with me to help keep CKUA on the air. It’s really fun.”

Collin and his mom Karen – who often volunteer together – discovered the station close to five years ago, during the 2014 Fall Fundraising Campaign.

“I had reached the point with the mainstream radio stations where I didn’t feel the connection to the music anymore,” Karen says. “It’s like when you’re hungering for a steak dinner but you’re only getting popcorn.”

Collin says he distinctly remembers the first time he heard CKUA. The family was driving to Edmonton from their home in Parkland County, flipping radio channels.

“CKUA came on and we were instantly like, ‘whoa, this is very, very nice,’” he says. “I remember hearing the conversation between the two hosts and then Baba played Little Maggie by Robert Plant and I was hooked,” says Karen. “It was like coming home. I donated the next morning.”

Karen says supporting CKUA is a no-brainer for her.

“I think the biggest reason I choose to give is because I’ve learned that whether I give generously or I give a little bit, I always seem to get back from that experience – more than I gave. When you give to CKUA, you really get.”

“It feels really good to do something rather than just giving money and saying ‘good job CKUA,’” adds Collin.

They are a family of monthly donors. During the recent Spring Fundraiser, they also gave 33 hours of their time – 23 from Karen and 10 from Collin.

Collin got to chat on-air with Terry David Mulligan during the recent fundraiser, but says he especially loves CKUA’s jazz shows.

“It just gives you that nice beat, you can keep your toe tapping,” he says. “It’s energetic, it makes you feel like you need to move!”

Karen’s particularly fond of Alberta Morning with Grant Stovel. “I enjoy the selection that he picks and you always learn something when you listen to Grant’s show,” she says. “That said, I listen all over the map. I love the variety of CKUA.”

These indefatigable supporters were on board once more for Spring Fundraiser 2.0.

“Spring Campaign 2.0 will definitely be important to CKUA because it’s the little extra burst that CKUA needs,” says Collin. “We need to make sure that the flame that is CKUA won’t go out!”

It’s especially good timing to support CKUA as we head into the major festival season,” says Karen, noting everything CKUA does to support and nurture arts and culture in the province. “And, to be perfectly honest, at this time of year, you can come home from work, grab a beer, sit on the deck and just enjoy the music. So it’s time to kick it back a little bit and kick in a little.”
—
Beyond Spring Fundraiser 2.0, Collin is also busy rehearsing for the title role in Oliver!