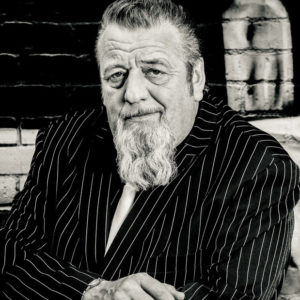 “Harpdog Brown sported tattoos from his blues heroes and lived much of his life on the road doing what he loved.” – Holger Petersen

Last weekend we lost a big personality in the Canadian blues scene, Harpdog Brown. The beloved and award-winning blues singer, songwriter, and harmonicist, died on January 7th, 2022. Over the next few days, CKUA will be paying tribute to his music, his instrument, and his role in the blues community.

Thursday, Jan 13 at 6pm MT on A Time for Jazz with Kodi Hutchinson

Kodi Hutchinson will be paying his respects to Harpdog Brown through a jazz context this week on A Time For Jazz, by spotlighting the bluesman’s instrument, the harmonica. Kodi will start off with Harpdog playing the blues, and then shift to feature both diatonic and chromatic harmonica players including Richie Pollack, Hendrik Meurkens, Gregoire Maret, William Galison, William Clarke, Carlos Del Junco and of course Toots Thielemans!

Cam Hayden will be spinning some Harpdog Brown favourites in the 10 o’clock hour of this week’s Friday Night Blues Party. As a longtime concert promoter, and the producer of the Edmonton Blues Festival, Cam will also reflect a bit on working with Harpdog and sharing what he brought to the blues scene.

From 4 -5pm MT on Natch’l Blues, Holger Petersen will be replaying the last interview he did with Harpdog in November of 2020. At the time, Harpdog was filming his excellent In The Doghouse film series in Sherwood Park. Listen this an excerpt of this conversation here:

Harpdog Brown was loved and respected by many. Be sure to tune in for one or all three of these celebrations.

Do you have a Harpdog Brown story? Be sure to check out the post below from the Harpdog team.

'In The Doghouse' with Harpdog Brown

Harpdog Brown has launched this new 9-part YouTube series featuring performances and interviews with a host of blues talents from across Alberta and the larger blues world.Listen