“…On Wednesdays I have the radio orchestra, composed of finished musicians who put on programs of the finest type of music over [at] CKUA once a month.”
Beatrice Carmichael
Edmonton Bulletin
November 2, 1929

[Regarding Beatrice Carmichael] “If it were suggested that no Edmonton musician is doing more for the musical development of the city and district at the present time than she, she would consider it an exaggeration, if she considered it at all.”
Edmonton Bulletin
November 2, 1929

Born Beatrice van Loon in 1889 in South Bend, Indiana, her musical talents were first recognized when she was just a preschooler singing solo onstage in Aberdeen, North Dakota. By the time she was a teenager, Miss van Loon had conducted her first operetta and won a gold medal at a Chicago singing competition. Her natural abilities were refined through years spent studying violin, piano, harmony, conducting, and voice. As a practiced and accomplished musician, Miss van Loon brought her musical talents to Edmonton in 1919 as leader of a small women’s orchestra performing an extended engagement at the Hotel MacDonald. At the hotel, she met local dentist Dr. James Burton Carmichael and the pair were married November 3, 1920.

Beatrice Carmichael, or Mrs. J.B. Carmichael as she became known, began to devote her time and energy to supporting and developing the musical arts community in Edmonton. By involving herself with the original Edmonton Symphony Orchestra and the Edmonton Women’s Musical Club, and founding the Edmonton Civic Opera Society, Mrs. Carmichael immersed herself in the local music community. In 1923, she began working with the University of Alberta Orchestra. Building upon the University orchestra, she organized and conducted the CKUA Radio Orchestra, which eventually grew to thirty-five members ranging from university professors to the campus messenger. As all radio programming was presented live at that time, select members of the orchestra regularly squeezed into the studio to present live performances of opera, symphony, and concert music.

Mrs. Carmichael, it seems, was not one to take an intermission. In 1929, when asked by a newspaper reporter if she had any hobbies, she answered laughingly… “Hobbies? I guess music is my hobby.” In many ways, Mrs. Carmichael was simply made of music. Her leadership, enthusiasm, and energy helped her make her mark on the music world at a time when women existed only on the periphery of the music profession. Her achievements are made even more significant when one considers that in 1929, women had just received legal status as persons in Canada.

With each performance and project, Mrs. Carmichael helped to grow and cultivate Edmonton’s musical talent. As a treasured part of Edmonton’s past, she is remembered for her unwavering dedication and passion to the city’s arts and music scene. In 1986, the City of Edmonton dedicated Beatrice Carmichael Park at 10024 104 Street NW and in 1994, she was inducted into the City of Edmonton Arts and Culture Hall of Fame. These honours serve as a thoughtful coda to a lifetime devoted to enriching the arts in Edmonton.

“[Beatrice Carmichael] is recognized as one of the finest musicians in the city [Edmonton]. With an unusual voice, as well as mastery of the violin, her conducting is on a par with that of the city’s best men leaders, as demonstrated to thousands who have listened in to the University Radio orchestra in the last four years, or have heard the University students’ orchestra at various campus affairs.” 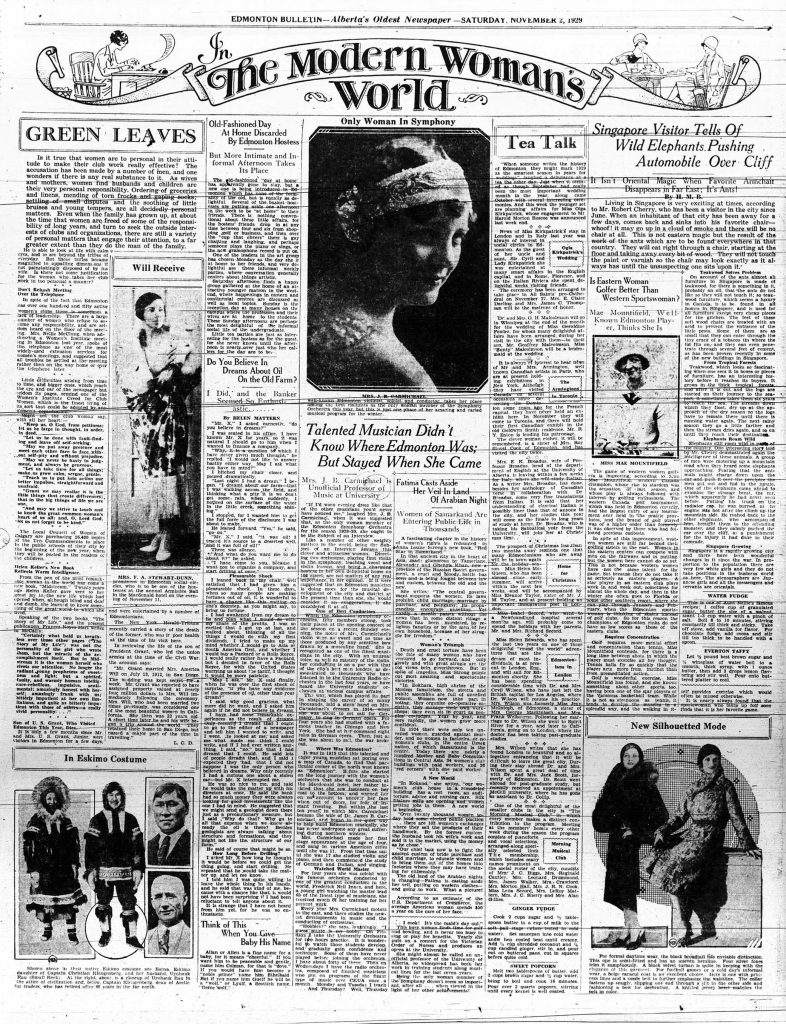 Article title: “Talented Musician Didn’t Know Where Edmonton Was; But Stayed When She Came.” Edmonton Bulletin November 2, 1929 (Click for a larger version of this image)