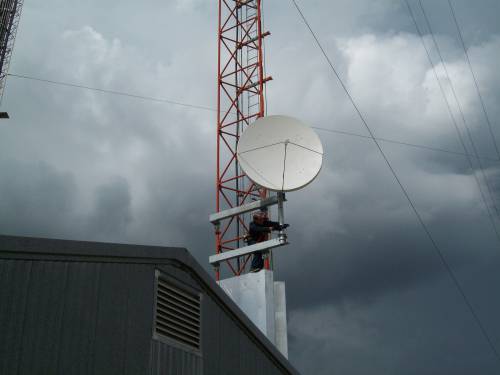 CKUA has 16 FM transmitters ranging in effective radiated power from 15 watts to 100,000 watts. As one would guess, the higher the power the further away a usable signal can be received. As a general rule, the high-power sites can be received with most radios at a distance of approximately 100km. This depends on weather, terrain between the antenna and receiver, and the quality of the receiver.

Building
The buildings in CKUA’s network range in size from a 5 foot by 5 foot phone booth-sized building in Hinton to a large multi-station facility in Calgary. These buildings house the transmitter and related equipment.

Tower
The tower is the steel structure that the antenna is mounted on. These towers range in height from 50 feet to over 500 feet. It is located close to the building because the transmitter is connected to the antenna with a large coax cable. The tower is held up with steel cables called guy lines anchored to large blocks of concrete.

Antenna
The antenna is a construct of pipe that provides an effective gain in power. The antenna multiplies the power of the transmitter by a factor of 0.6 to 6 times. These antennas can be from 1 meter long to 25 meters in length and weigh up to 3500 lbs.

Satellite Dish
CKUA transports its programs to each site via satellite. The dish is located beside the building and is pointed at a satellite called Anik F1R. The dish can be as large as 12 feet across.