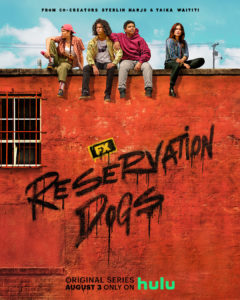 When it premiered in August of 2021, Reservation Dogs quickly became one of the most talked about and critically acclaimed streaming series of the year. The comedy-drama is the first show to use all-Indigenous writers and directors, and most of the cast and production team are also Indigenous.

Set in rural Oklahoma, Reservations Dogs follows a group of teenagers as they fumble towards adulthood, while dealing with the recent suicide of their friend.  One of the breakout stars of the series is 20-year-old Paulina Alexis, who plays sharp-tongued character, Willie Jack. Alexis hails from the Alexis Nakota Sioux Nation, located an hour west of Edmonton.

On Tuesday’s Traffic Jams, Paulina Alexis joined CKUA’s Lisa Wilton to chat about how her dad inspired her acting career, her first major film gig, staying grounded and so much more:

On Film: ‘Portraits From a Fire’ at Edmonton International Film Festival