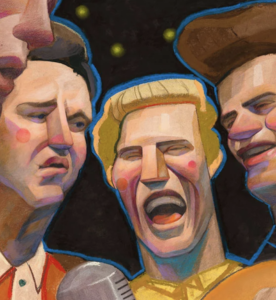 On December 4, 1956, Elvis Presley, Johnny Cash, Jerry Lee Lewis and Carl Perkins, all found themselves at Sun Records Studios in Memphis at the same time.

So, they did what musicians thrown together often do – They had an impromptu jam. It was that resulting jam session that prompted a local journalist to dub them ‘The Million Quartet’.

That historic session is recreated in Theatre Calgary’s season closer, Million Dollar Quartet, premiering Tuesday and running through May 22nd at the Max Bell Theatre in Arts Commons.

Musical director Steven Greenfield, who also plays Jerry Lee Lewis, joins CKUA’s Lisa Wilton to discuss how the show is not only seen through the lens of the musicians themselves, but also of those that inspired them:

On Theatre: Is the white bison a harbinger of peace or conflict?

On Theatre: Kim’s Convenience returns to its roots

On Theatre: New work from Lianna Makuch at Collider Festival