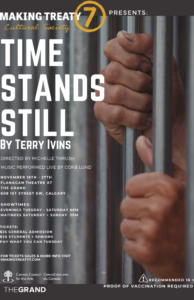 Making Treaty 7 kicks off its new season with an exciting new production of Time Stands Still.

Indigenous Southern Alberta playwright Terry Ivins wrote it two decades ago, and it’s being given a remarkable new treatment with a collaboration between a pair of his longtime associates–Making Treaty 7 Artistic Director Michelle Thrush, who’s directing this production, and the musical narrator for this show, a cousin of Terry’s by the name of Corb Lund.

Time Stands Still tells the story of two lifelong friends, as they mark the one-year anniversary of their incarceration. It presents a gritty portrait of friendship, a searing social critique, some crackling (and ultra-salty) dialogue, and musical commentary from Corb Lund, performing tunes from his songbook and material freshly created for this show.

Time Stands Still runs through November 27 and you can buy tickets to the online version for a limited time.