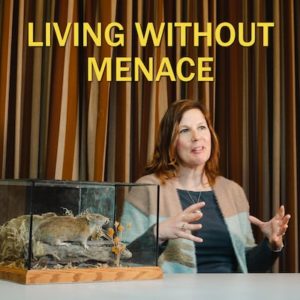 What makes Alberta unique? Is it our mountains? Prairies? Long winters? No PST? Wild roses? To be quite honest, we don’t have an exclusive on any of those! So, what is the TRUE Alberta Advantage? (Besides CKUA, of course…)

Well, in a word: rats! Or, rather, the lack of them. Alberta is Canada’s only rat-free province. In fact, we’re globally renowned as the world’s first-ever human-inhabited region to rid itself entirely of those much-maligned rodents. So… how does that work, exactly? How did we accomplish this feat?

These are among the many rat-related questions which are answered in Living Without Menace, a wildly entertaining new documentary from Calgary-based filmmaker and playwright, Ted Stenson. He’s long been fascinated with this unique and somewhat bizarre aspect of Alberta’s ongoing history. So, he uncovered some of the history of the initiative; travelled to rat flashpoints near the Saskatchewan border such as Medicine Hat and Alsask; followed around modern-day rat patrol officers on duty; went all the way to New Zealand for a very different perspective on rat population control, and just generally coaxed this story out of whatever rat holes it may have been be hiding in.

Living Without Menace is narrated by Alberta’s own Nathan Dales (of Letterkenny fame) and is now streaming on CBC Gem, as part of the Absolutely Canadian documentary series. Ted Stenson joined CKUA’s Grant Stovel to chat about this compelling new doc.

Mary Corbett: “CKUA has been a big part of my life since I was born”