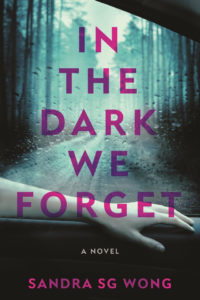 Since bursting onto the literary scene with her debut novel nearly a decade ago, Alberta author Sandra SG Wong has been crafting captivating tales that put her own very personal spin on the classic crime fiction genre. She’s been a finalist for multiple Crime Writers of Canada Awards of Excellence, and has worked toward greater diversity in the field, in her capacity as a member of organizations Crime Writers of Color and Sisters in Crime. And with her brand-new book, she’s also bringing a local focus to her imaginative storytelling.

Being touted as “a hair-raising high-wire act,” In The Dark We Forget hits bookstore shelves on June 21st via Harper Collins Canada. A taut tale about amnesia, identity, family, and a a $47 million winning lottery ticket, the novel’s action is set mainly in Sandra’s hometown of Edmonton, as well as Yoho National Park (along with what’s described as a “a shout-out to Lethbridge”).

Sandra has a pair of virtual launch events slated for this week to celebrate the novel’s release; and she joined Grant Stovel to tell us all about her brand-new thriller, as well as the importance of broadening the perspectives offered up in crime fiction Canadiana.

Grant had a chance to ask Sandra two bonus questions:

1) What are three foundational works you’d recommend for people who’d like to get into crime fiction?

Of course, the queen herself: Agatha Christie. I’m far from a Christie expert, but I’ve always been partial to And Then There Were None. I’m also a sucker for classic American noir, so my problematic fave, Raymond Chandler‘s The Long Goodbye. A little more contemporary would be Walter Mosley’s Devil In A Blue Dress, from 1990, which introduces the iconic Easy Rawlins. I think I should be applauded for my restraint! There are so many wonderful authors and books in this broad and thriving genre.

2) What are three books by Alberta writers that you’d love to recommend that people check out?

I’m cheating with this one: Premee Mohamed’s Beneath The Rising trilogy, which begins with the book by the same title. The award-nominated Hollow by Rhonda Parrish, a YA horror novel. And a new YA thriller by Kate Boorman, Into The Sublime.

On Books: Rita Bozi shares “When I Was Better”