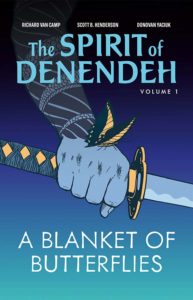 Inextricably intertwined, cultures meet at the crossroads where historical trauma is overcome through the spirit of adventure and partnership. Acclaimed Tłı̨chǫ Dene author Richard Van Camp has just had A Blanket Of Butterflies released as a full-colour graphic novel. The first in a series, the story centers on a Japanese man who seeks to reclaim his grandfather’s lost samurai sword and armour from a Fort Smith Museum. As he undertakes this journey, he is met with colourful characters who lay claim to the treasured items, and he gets assistance from an unlikely ally.

Told with a wry sense of humour and illustrated in a way that makes the characters jump off the page, A Blanket Of Butterflies was just optioned for film and television. An exciting time, even by Richard Van Camp’s standards!

The celebrated author joined CKUA’s Tony King on Thoroughfare to talk movies, the spirits that inhabit artifacts, and who is “Benny the Bank” exactly, anyway!

On Books: An Orchid Astronomy by Tasnuva Hayden

On Books: “The Roof, The Beatles Final Concert” by Ken Mansfield