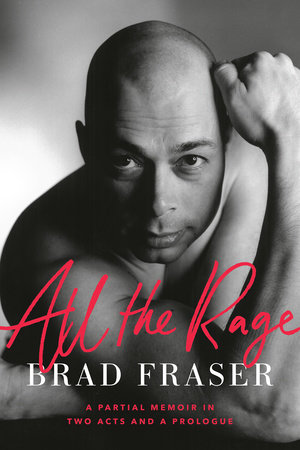 Edmonton playwright Brad Fraser became one of the most celebrated and talked-about figures in the Canadian arts scene when he first burst into public view in the 1980s.

His funny, poignant, provocative plays foregrounded queer issues at a time when they were still very much on the margins. His brilliant work came to prominence just as the AIDS crisis did, and it often reflected what the community was experiencing during that turbulent time. His work also became a polarizing cultural flashpoint—a cause for celebration for many, as well as a lightning rod for the homophobia in the air during that intense period.

His brand-new book is All the Rage: A Partial Memoir in Two Acts and a Prologue. With his characteristic wit and candour, Fraser recounts his journey from an impoverished, itinerant and abusive childhood in Northern Alberta and B.C., his embrace of the arts, his acceptance of his sexuality despite a repressive upbringing, and becoming an Albertan literary & queer icon during a time of great societal change.

Grant Stovel spoke with Fraser about his new book on the Tuesday, May 18, 2021 edition of Traffic Jams.