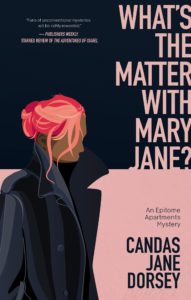 Candas Jane Dorsey is an Edmonton based author who wanted to be a writer from the time she was a small child. Eventually, Dorsey went down the road of creating a hardboiled detective story in the style of Raymond Chandler or Elmore Leonard.

Set in her native city, the Epitome Apartments Mystery series served as a distraction for the author who sought to challenge herself to have fun whipping up something the captured the paradoxical nature of where she lives. Hence The Adventures of Isabel was born. So successful was the first novel, Dorsey reanimated her reluctant sleuth to come back into the pages of a new one entitled, What’s The Matter with Mary Jane?

Much like the first in the series, the latest has proved a runaway success, in fact it recently picked up the Best Traditional Mystery prize at the Whodunit Awards. The writer joins CKUA’s Tony King on Thoroughfare, Wednesday June 8 at 1:45 PM to shed light on what the Whodunit Awards are…without giving away “who done it” in her latest novel.

On Books: Shawna Lemay Discusses ‘Everything Affects Everyone’