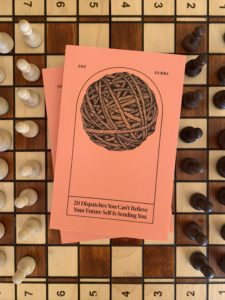 Joe Gurba is back! You may know him from his years spent recording and performing under his old hip-hop moniker, The Joe. Or you might remember him as DJ Argue Job (an anagram of Joe Gurba, btw.) Perhaps you recall his inspired work as the driving force behind Edmonton indie label Old Ugly Recording Company, which helped launched the careers of artists like Jessica Jalbert, Jom Comyn, Doug Hoyer and Mitchmatic.

Over the past few years, Gurba’s been a traveller, a restaurateur, a wine importer, a barman, and now he’s an author. His first book is described as a work of “genre-bending auto-fiction,” entitled 20 Dispatches You Can’t Believe Your Future Self Is Sending You.

CKUA’s Grant Stovel had a conversation with Joe Gurba on Alberta Morning on Friday, December 17, 2021.

On Books: Todd Babiak releases ‘The Spirits Up’

On Books: ‘Grain Elevators: Beacons of the Prairies’ by Chris Attrell