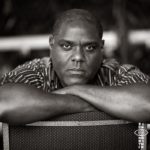 Brought to life by a dazzling array of musical luminaries from around the world, Afrofuturism features everyone from British soul singer Joss Stone to Gambian kora master Foday Musa Suso, on an album released and co-produced by a label and producer based right here in Alberta!

Afrofuturism co-producer and head of Alberta’s own Temple Mountain Records, Mike Meurin recently joined Grant Stovel from his Calgary home, for a chat about the record.