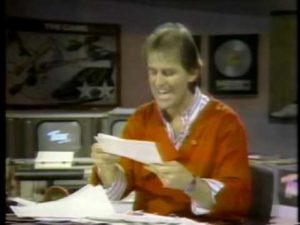 On Thursday, June 30, CKUA celebrated a milestone… that is, a mully-stone… saluting all things Terry David Mulligan! He was one of Canada’s first television VJs and has probably interviewed everyone who is anyone in the music business.

TDM landed here at CKUA in 1995 with his show Mulligan Stew, and has been with us on Saturdays at 5pm ever since.

A very happy birthday to the OG, the GOAT, the encyclopedia of all things either grown on a vine or heard through the grapevine, Terry David Mulligan, whose presence and passion have supported the Canadian musical and artistic landscape for over 50 yrs. (I swear I used to open limos for him back at Much Music in the 90s … heck I still do, just a different venue.) TDM is the only person I need at least 2 coffees before we chat. Mulligan Stew, you turned me on 20 yrs ago, and I never looked back. – The Harpoonist, Shawn Hall (of The Harpoonist & The Axe Murderer and Satellite & The Harpoonist)

What an awesome radio station we have! TDM is the reason I became a devoted listener. Yesterday’s show was such a great tribute. Loved all the interviews and as always, fantastic music! Thanks to CKUA for all you do!! – Marc H.

A number of years ago my husband and I were at the Edmonton folk festival going to the CKUA tent. I don’t know what overcame me but there was TDM and I just went right over to him and gave him a big hug. No I’d never met him before but somehow it was just like seeing an old friend. Love his show, for many years we would cook and always dance to his music on a Saturday dinner time. Happy birthday TDM!!! – Margaret J.

I grew up just up the road from TDM and have had the pleasure of hearing him on AM and FM as a kid when they actually played great music in late 60s and early 70s. I remember him being all excited coming back to Vancouver after he checked out the San Fran scene and FM. Doing MUCHwest and some great interviews like talking to Billy Cowsill on backstax was very interesting. Billy was not one who liked to talk about the agony of being taken advantage of by his dad and taking the heat for his younger brothers. As a guy from BC it was a revelation hearing he was on CKUA, bringing a bit of Alberta to us BC transplants. Rock On! – Paul B.

My friends and I were out for breakfast at Capers in Dundarave (West Vancouver) one morning years ago, we had just been given the task of raising $500,000 for a much needed non-profit society in North Van and were looking for famous local celebs to add their name to our campaign. Well who happened to come in and sit right beside us, yep, the man himself TDM. I really don’t believe in interrupting people like Terry when they’re out in public but I felt I had to take advantage of this opportunity for the cause. I eventually gathered the courage to approach him. Well he was so gracious, he listened to what I had to say and said he would think about it. He ended up giving a lot of his personal time and energy to our fundraising events over the year and I will always be grateful for his kindness and support. We reached our goal thanks to Terry and the friends he brought along with him. Thanks Terry, and happy birthday! – Maureen J.

Let me start my saying I’m bipolar 2. Pre-covid I met some of the CKUA staff including Terry David Mulligan. It was during a spring fundraiser here in Calgary and one of my symptoms came to fruition. Spring brings IMPULSIVENESS. In spades. Oh yes. It all started when I heard “Wide Cut Stew” and TDM said jokingly to Allison “Gee, there’s nothing to eat here.” Well I that’s ALL it took. My whirlwind mind was set into motion. I called an eatery in Inglewood and ordered a plethora of food including cake. Oh yes. I knocked on the Calgary CKUA studio door as if bearing gifts for the Magi and naturally David Ward greeted me a quizzical look. Allison Brock entered the room with a similar expression, and a warm smile. TDM must have recognized my symptoms from his RCMP experiences. He stepped closer and shook my hand saying, “Hi, Terry David Mulligan.” (Damn. Such a handsome fellow too!) The whole episode was an embarrassment for the longest time. Now it makes me laugh out loud. All CKUA hosts I met that day were kind but meeting TDM was particularly memorable. Happy birthday, Terry. 🎉🎈🎈 – Marie S.

As we marked Terry David’s long career in radio and TV, CKUA’s Senior Producer Mike Spear talked with him to get some of the story behind the person we hear behind the microphone every week:

We rely on donors to support programming 365 days of the year. Thank you to everyone who made a donation to CKUA TDM’s honour.