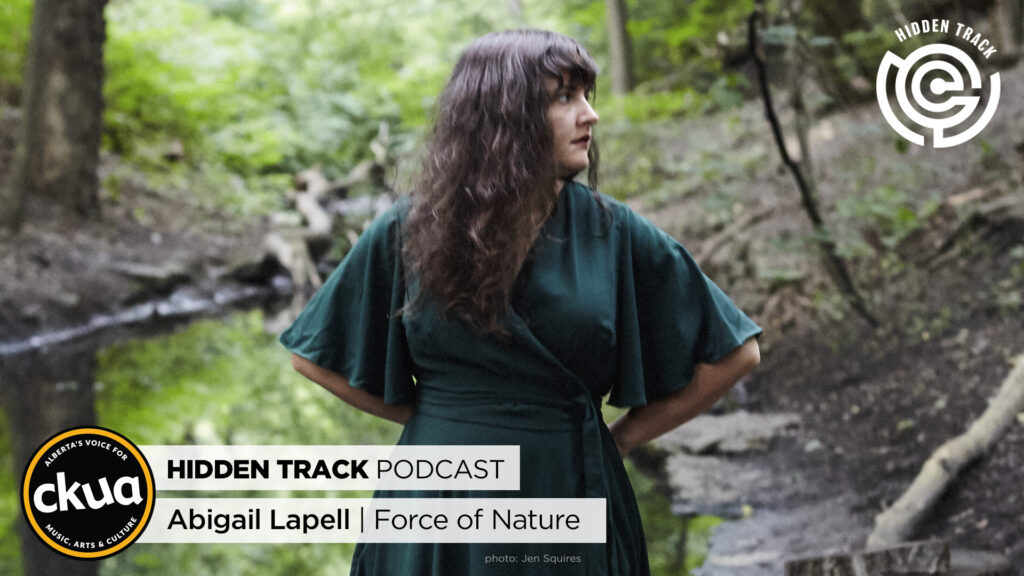 She has that rare ability to draw the listener in. Abigail Lapell‘s songs, voice, and smouldering musical presence can bring a hush to even the loudest of barrooms. She just kind of makes you want to lean in closer, and get lost in the elemental, otherworldly tales she weaves through song. So get ready to get lost! For this episode of Hidden Track, Abigail joins us in live performance and conversation from CKUA’s Studio A.

Abigail’s debut album came out in 2011 to rave reviews; and with each successive record, she’s broadened the scope of her expressiveness as a singer and songwriter, and she’s grown into a reputation as one of the most captivating tunesmiths on the scene today. She’s already won a couple of Canadian Folk Music Awards, and the most vied-for awards, to boot: Album of the Year, and the English language award for Songwriter of the Year.

We’ll hear the Toronto-based artist live in CKUA’s Edmonton studio, as she treats us to an exclusive performance of three songs from her much-acclaimed 2022 album, Stolen Time. And in her characteristically funny and insightful manner, she also tells us about teaching herself to play and write songs on a found guitar, which was held together with duct tape; how for her, being a songwriter means attempting to tap into a mysterious force much larger than herself; what it’s like to criss-cross this giant land all by herself on tour; the central role that nature and natural imagery play in her work; how the lull of the pandemic prompted her to spark her creativity by teaching herself piano (as well as a little do-it-yourself plumbing); and the surprisingly evocative meaning of the musical term “tempo rubato”.