Roy Forbes is one of Canada’s best loved songwriters and performing artists. He’s been at it for over fifty years now and has picked up some tokens of appreciation from his peers along the way. There is a street named after him in his hometown of Dawson Creek in Northern B.C. and a star on Vancouver’s Granville Street where the names of the BC Entertainment Hall of Fame members are enshrined. Over the years, Roy has had a couple of Juno nominations and has a handful of WCMA awards on his shelf. In 2021, he received a CFMA Producer of the year nomination for his work on his current album, Edge of Blue.

Mainly, and more importantly, Roy is firmly etched in the minds of thousands, tens of thousands in fact, of music lovers across the country. Some remember a skinny kid who went under the name of Bim, others the more mature man who reclaimed his ‘real’ name. Some got to know him at festivals from Faro in the Yukon to Lunenburg in Nova Scotia, as Roy trod the boards from the seventies to a stellar finale performance at the fortieth anniversary edition of the Vancouver Folk Music Festival. For others it was at a myriad of folk clubs and concert stages. For still others it was Roy as a member of a contemporary folk supergroup - UHF - where he joined forces with Shari Ulrich and Bill Henderson. For some it was Roy’s searing rendition of Hank Williams’ So Lonesome I Could Cry, for others his sweet treat Christmas anthem- Mince Meat Tart, or Lifting My Heart, while others heard him second hand through Shawn Colvin’s cover of Talk Around Town, one of the many recordings of his songs by other artists. Roy has made his mark for generations of listeners as a solo, band leader, ensemble member, interpreter, and songwriter. This is not to mention his work as a record producer, film composer, songwriting mentor, radio host at CBC Radio & CKUA, and popular music historian of 78 RPM records. Over the last five decades Roy has had a few brushes with fame and endured, becoming an organic part of Canadian music.

The last few years have been a challenge. Having dealt with poor vision all his life, Roy was blinded by an accident in 2015. He may have lost his sight but not his vision. Roy adapted to his new reality relatively quickly, returning to touring, performing, and recording, and all the other things he does so well.

As Roy began getting used to a life without sight. New songs began to emerge. Ten of those songs became the core of his current record, Edge of Blue, something like his 11th solo effort.

What are three go-to songs that inspire Roy?
"Music And Rhythm" by Mighty Sparrow
"After The Rain" by John Coltrane
"Things Have Changed" by Bettye LaVette

What is an interesting detail you might not know about Roy?
He was once the answer to a Trivial Pursuit question. 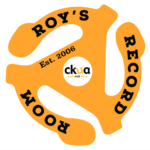 Roy’s Record Room is a weekly radio show that unravels and reveals the roots of today’s tunes, for the pure joy of it. Roy spins some familiar but mostly obscure 78s, 45s and LPs from his ever-expanding record collection – sides that don’t show up on many other stations. He loves all kinds of music and explores that eclectic passion weekly on Triple-R Radio.

"I love the sense of history that CKUA gives me as a listener as well as the sense of the now and the future," says Roy. "CKUA is the sound of surprise. You never know what you'll hear next”.

Roy’s record collection is more like a record library - running into the thousands of discs, with some even sent in by loyal RRR listeners. His appetite for music is virtually unlimited and he finds creative revelations everywhere. Roy’s Record Room (RRR) launched in 2006.